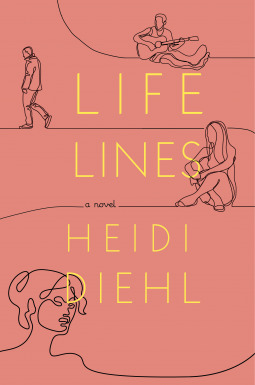 I almost didn't read this book because the Goodreads ratings were so abysmal, but I really liked the premise so I decided to try it anyway. I can see why LIFELINES received a lukewarm reception from its audience: this is one of those books that will only find a niche audience. It isn't a happy book and the characters aren't particularly likable, which is problematic when the story lacks a solid plot and is largely character-driven. It has multiple POVs and the timelines jump around a lot, and when it finally ends, it feels kind of ambiguous and abrupt.

That said, I found it incredibly interesting. Roughly, it's the story of an unconventional family. Louise is married to Richard, her second husband, with whom she has a daughter: Margot. But before Richard, she was married to a German man named Dieter, with whom she has another daughter, Elke. Louise met Dieter in Dusseldorf in the 1970s while at art school and they bonded over mutual attraction, love of music, and the zeitgeist of the 1970s: hippie culture, free love, and drugs.

But as an American living in Germany, Louise experiences a culture shock. The shadow of the war and its atrocities hangs over the country and its forced cheer like a dark cloud, and memories of it still inspire melancholy from a shame so deep that nobody likes to talk about it. For Louise, WWII feels very distant, but here, many are still inextricably linked to it, including Dieter, whose own father played a dark and despicable role in it that his mother has kept from him for all these years.

The "current" timeline involves Elke going back to visit her father after her grandmother's death and wanting Louise to come with her. There, she meets Dieter again, and past wrongs are uncovered, as well as the way that she transitioned to dating Richard while still married to Dieter, and how the three of them even lived together in what is perhaps the most uncomfortable "three's company" situation ever. As their relationships and pasts are untangled, the reader sees these imperfect characters struggling to reconcile who they are with who they were, and how they connect to family.

My favorite parts were definitely the ones in the 1970s because of the intimate portrait it painted of Post-War Germany, and what it's like to be an expatriate living abroad. I think Elke was probably my favorite character, because she seemed to be the most reasonable. Louise was the most interesting, although I disliked her taste in men (Dieter and Richard were both so childish), and her whiny younger sister seemed to take after her father a little too closely. I'm not sorry I read this, and I think if you like unstructured stories with unlikable characters, you'll enjoy LIFELINES, too.