Crave to Conquer by Zoey Ellis 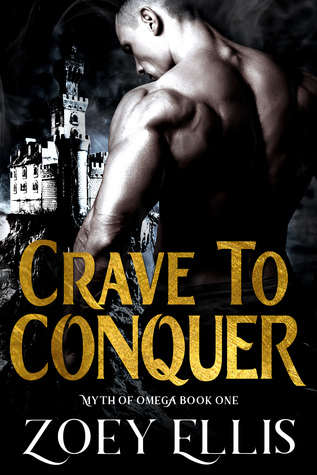 I'm somewhat new to the whole alpha/omega subgenre. I know it started in the M/M fanfiction universe and was translated into M/F erotica a few years ago, where it exploded in popularity. My two friends on Goodreads, Maddy and Meredith, are actually the ones who got me into the subgenre in the first place. I've tried several other authors before Zoey Ellis-- Eva Dresden and Addison Cain-- but I really didn't like their writing style, and the alternate universe Quentin Tarantino-esque dystopian sci-fi settings where people have the traits of wolves (except not, because pack hierarchy with alphas/betas/omegas/etc. was actually debunked a couple years ago, so whoops). I was beginning to wonder if maybe a/o just wasn't for me, and then I picked up this book and was like YAAAAASS.

So, first a caveat. I rate every book I read solely based on entertainment and quality metrics that are particular to my tastes alone, and how well the book performs compared to similar titles in its genre. That's why a book that's considered a literary classic by many, like, oh-- Pulitzer prize winner, THE ORPHAN MASTER, might get a two star DNF review, and books about trashy fantasy erotica, like CRAVE TO CONQUER, get a glowing four star review (spoilers). Is it fair? No, and that's why it's so delicious.

CRAVE TO CONQUER, unlike the other two books I've read by the aforementioned authors, takes place in a fantasy setting. Our hero, Drocco, is the ruler of Lox, which cracks me up because lox is the brined salmon that you buy at Jewish delis to put on bagels. So after reading about the kingdom of Lox, Drocco was forever known to me in my head as Supreme Leader of the Salmon Squad™ (SLotSS™). SLotSS™ is an Alpha, which means he's the big man on fish campus, but it's been over 100 years since anyone has had an Omega, which are like the Super Shiny Holographic Pokemon Cards™ of mates: not only are they rarer and more valued, they have magic mating powers.

Cailyn is a secret Omega who is hiding her traits with magic. I've found that this "hiding my Omega status" subplot is pretty common in a lot of these, for various reasons, but here in CRAVE TO CONQUER, Cailyn has the best reason yet. The Omegas didn't actually disappear or die off: they're all in hiding, having left to fend for themselves after Alphas took to abusing their mates and using Omegas up before casting them aside, broken. Cailyn is in Salmontopia™ to make sure that the Alphas aren't close to finding their hiding spots, basically doing a reconnaissance mission. SLotSS™ thinks that she's a Beta female, but he's still wildly attracted to her and even though she's not quite as good as the Omega in his head that he plans to take someday, she'll do in the interim, he thinks.

But then one day, Cailyn's blocking magic fails and TROUBLE BEGINS.

Another caveat, this is a pretty brutal romance. Consent really doesn't happen for a lot of this book and I know that is going to be triggering for a lot of people. It's not very comfortable to read and part of the reason I was able to get through the book is because I really didn't see the characters together as a couple, in that I didn't ship them. To me, it was more of a horrific and fascinating character study about what an alternate fantasy universe would be like if people behaved like wolf pack archetypes that no longer hold any credibility with animal behavior scientists, and there just happened to be some erotica thrown into the mix. It was well written and the world-building was great, and it didn't go quite as over the top as Eva Dresden's BROKEN did (that was so brutal I had to put it down). Thank goodness, because I think this is about as much cruelty as I can stomach.

It does end on a wicked cliffhanger, though, so you've been warned.

Honestly, though, this was a great guilty pleasure. I would read more from this author and from this world, which is not something I can say about every series I've tried. If you're into dark erotica or books from the omegaverse subgenre specifically, you'll probably really enjoy this book.