A Place at the Table by Saadia Faruqi and Laura Shovan 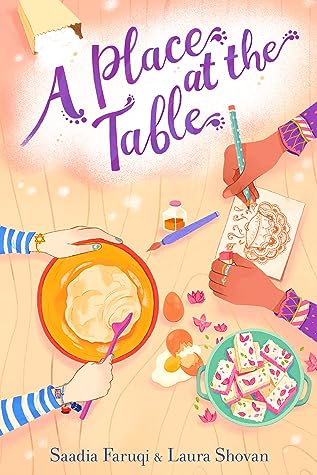 I was just saying on Twitter that I was craving a rivals to friends story that's like The Great British Baking Show and then an ARC of this book practically fell into my lap. A PLACE AT THE TABLE is a middle grade novel about two girls named Elizabeth and Sara: one of them is English/Jewish and the other is Pakistani/Muslim. They end up meeting at an after-school cooking class taught by Sara's mother, and even though at first they don't like each other all that much, they end up finding out that they have more in common than they ever dreamed.

Elizabeth's mother misses the UK and has depression, which leaves Elizabeth to pick up a lot of slack when her mother is too tired to cook or clean. To make matters worse, her best friend has taken up with another more popular girl and seems to have discovered a hidden well of intolerance that she has never really showed until now. She's worried that her mother's depression will get in the way of her passing her citizenship test, and that she might just decide to abandon her and her siblings for the UK.

Sara's mother is also in the process of studying for her citizenship test. There are also money problems that their catering business can't quite cover, which is part of the reason her mom has started teaching. Sara has some ideas on how they could resolve some of these problems but she's too anxious to share them and worried that her parents won't take her seriously. In addition to money woes, she also feels like the odd one out at her new school, especially with people making nasty intolerant comments about her and her family just often enough to make her feel unwelcome.

A PLACE AT THE TABLE is a great book because it's inclusive, heartwarming, and sweet, focusing on friendship and empowerment, and the importance of being open and honest. I loved how food ended up being the thing that united everyone in the end, and how friendship was the key factor that resolved some of the problems. There were also several moments in here that turned tropes on their head, most notably with the character of Stephanie. I don't often read middle grade because I feel like it sometimes has this tone that talks down to its readers, but this is the rare and precious example of a book that doesn't do that: that feels like an authentic preteen voice without any adult judgement.

I would recommend this book to anyone who likes stories about friendship and food.