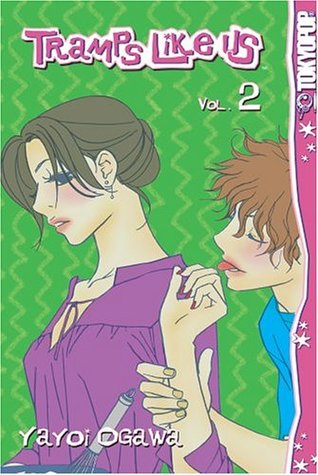 Still really enjoying this series. I think I liked the first volume better so far, but it was fun to see the relationship deep between Sumire and Momo. Momo is Sumire's pet, a young homeless man she found in a box outside her apartment. She lets him live with her like a cat or a dog, and treats him like one, taking care of him and feeding and washing him, but nothing sexual happens.

At the same time, we see Sumire struggle with the day-to-day annoyances of being a career woman in a big city: perverts on the train, jealous coworkers, irritating ex-boyfriends, and a dating life that is frustrating, confusing, and enticing by turns. Sumire is currently dating a guy she knew from school named Hasumi, but her pet is jealous, and Sumire herself isn't sure whether she's really into them when every time they try to get intimate, something bad happens, to the point that she feels cursed.

As I said in the previous book, even though this isn't for young audiences, it isn't a hentai manga. It's actually not that sexual at all, even though it does contain sexual situations. There is sexual tension between Sumire and her pet, but the connection between them is more about comfort and satisfaction than it is about weird sexual urges. Sumire uses Momo as her security blanket in a way; he makes her feel needed, and taking care of him and having him snuggle with her makes her feel loved in a way that feels like there aren't any strings attached (most of her relationships have strings).

Tramps Like Us is a concept that really shouldn't work, but does for whatever reason. I like all the characters, and even the annoying ones end up seeming more sympathetic when we learn more about them. It was interesting to learn more about Sumire's ex and why he cheated on Sumire, and how the pretty, feminine coworker who drives Sumire insane isn't quite as problem-free as she pretends. If you suspend your disbelief, this is a very nice josei comic about a very weird relationship.