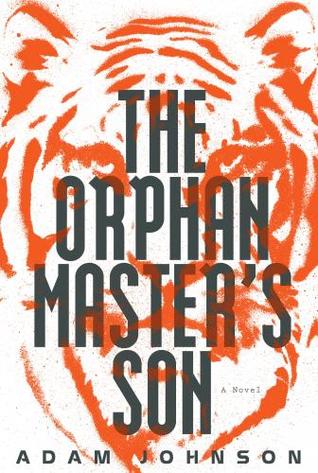 There are two kinds of books my mom gives me: books she genuinely enjoyed and books she got bored with and thought I might like to hate-review before chucking them into the donation box. Usually she tells me which is which before she gives them to me, but not always, and THE ORPHAN MASTER'S SON was one of these books. I was excited to read this initially because it won the Pulitzer Prize and it's about North Korea, and if you've been following me recently, you've probably noticed that I've been on a bit of a nonfiction binge of North Korean history and memoirs. I honestly didn't plan it out that way, but for whatever reason, I had about five of them stockpiled on my Kindle and ended up reading all of them during AAPI Heritage Month.

THE ORPHAN MASTER is about a boy named Jun Do (John Doe, get it? Get it? SO SUBVERSIVE. SO CLEVER) whose beautiful mother was whisked away to Pyongyang to entertain the bigwigs, as beautiful women often are (no, seriously, look up what the "Joy Brigade" is). His father runs a work camp for orphans and Jun Do is allowed some trifling amount of power, although his father subjects him to cruelties to give the illusion of equality, and he has low songbun because he's regarded as an orphan... even though he's not. Anyway, he becomes noted for his work, and ends up becoming a professional kidnapper, which was actually quite true. Kidnapping was all the rage under the reign of Kim Jong-Il, which you can read more about in A KIM JONG-IL PRODUCTION. The problems begin to occur when this book tries to take a Catch-22 sort of approach to North Korea, only it ends up sounding woefully Western and just not very good.

Here's the thing about the blurb. The entire blurb describes everything that happens before page 100. After that, it just becomes woefully cyclic and repetitive and dull. I feel like it also takes a very Westernized approach to North Korea. The whole idea of "rising through the ranks," for example, based on the memoirs I have read, just isn't very feasible. If you have a low songbun, you're doomed. Even if you're an A-plus student who excels in school, you will NEVER advance because you're considered a liability by the government. The whole idea of songbun precedes birth. If your grandparents were foreigners or defectors, the taint will follow their generations. That's why it's such a big deal when someone violates the rules, and it's why the population is so eager to narc on one another: it's not just their future at stake, it's all of the generations to follow.

The whole Cinderella mythos is a very Western concept and from what I've read, doesn't really exist in North Korea. Humility is important, but it's a humility steeped in proud lineage. I really, really doubt that a parent would just allow their kid's songbun to drop just because it was convenient. That idea of starting out a traitor and becoming a prestigious official is just not something that would happen in North Korea. Likewise, the way the North Korean characters casually make fun of their government also just wouldn't happen. In the books that I read, all of the people who let something mildly treasonous slip were shushed or punished by their parents, taught early on that to speak ill against their country or their leaders could be fatal. That vibe just isn't present here. I feel like the author was trying to capture this tongue-in-cheek, CATCH-22 vibe about North Korea, but it just didn't work. It ended up being boring and trite and (based on what I've read) not very accurate.

I read the author's note in the back where he gives this interview, and he actually has been to North Korea, and he admits that he wasn't allowed to talk to citizens, only to his handlers and people who were authorized to speak to Western visitors, so the only way he could "bring their stories to life [was] through fiction." And granted, there's such a thing as artistic license, but at the same time, it's really hard to divorce oneself from one's own biased perspective when writing a book about a culture that has a very different psychology embedded not just in the culture, but also in the language. I posted a status update saying that my fear while reading this was that it would end up being the North Korean edition of AMERICAN DIRT, and while it wasn't quite that laughably bad, it also comes across as having a number of blind spots with regard to some important aspects of the culture.

I am shocked that this book won a Pulitzer, but I guess I can see why it did. There's a mystique about North Korea here in the West, and because the author has actually been there, this book can be packaged as "authentic," "brave," and "controversial." I feel like the publishing industry has a history of rewarding people who are white who write about the edgy histories of people of color-- AMERICAN DIRT being one of those, but also THE HELP and MEMOIRS OF A GEISHA-- and even though this comes across as slightly less appropriating, it still doesn't feel authentic, and it's someone trying to write the "story" of a specific group of people when that story isn't really theirs to tell.

As an author myself, I'm definitely not saying that people can't and shouldn't write about other cultures than their own (I am a white lady, after all, and it's not really my place to play the PC Police, nor would I want that role), but it's important to be mindful of how easy it is to get things wrong, and how the stories are often just better when they're being told by people who grow up there and have experienced these things firsthand. If you're really interested about getting to know the "real" North Korea from #ownvoices authors, I would urge you to read instead THE GIRL WITH SEVEN NAMES, UNDER THE SAME SKY, and A RIVER IN DARKNESS, all written by actual defectors. As for fiction about North Korea, there's a delightful collection of short stories that were smuggled out of the country and published under a pseudonym, called THE ACCUSATION.

But hey, other people enjoyed this book and you might very well, too. YMMV.