The Baddest Bitch in the Room: A Memoir by Sophia Chang 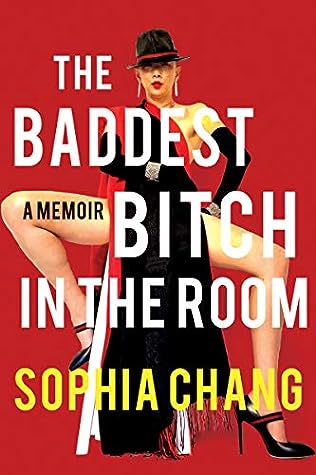 When I first saw the title of this memoir, I thought it was one of those self-help books geared towards making women feel more confident and enabling their inner #girlboss. THE BADDEST is not that book-- although honestly, reading this book was about a thousand times more valuable and inspiring than the few self-help books that I've tried to read.

The woman striking the power pose on the cover who looks like she could be a model for Fashion Nova is Sophia Chang, considered to be the first Asian woman in hip-hop. She managed a lot of very famous and influential artists who were keystones of the 80s and 90s hip-hop scene, including the Wu-Tang clan guys. On one level, this is a career retrospective, but it's also a fascinating memoir of motherhood, family, friendship, overcoming adversity, and embracing the things that you love.

I feel like some people are going to be put off by this memoir because Sophia Chang doesn't fit into the box that is labeled (in feminine script, of course *eye roll*) "acceptable woman behavior." She is crass at times, outspoken at others; she is confident and completely unapologetic, and embraces her sexuality in a way that I couldn't help but admire. Honestly, though, I feel like the people who are put off by those things should probably read this anyway, because an important tenet of feminism-- and basic human respect, actually-- is respecting others for the choices they make, even if they aren't necessarily the ones you would make-- as long as they don't cause any harm. Women need to be allowed to take risks and make the mistakes that men do in their pursuit of happiness. As long as we condemn one group and not the other for making those same decisions, our society will never be equal. She has a great chapter in here about how so many people are quick to judge a woman for having too many partners, and yet nobody thinks badly of a man for doing so. I loved that, and it's just one example of how Chang doesn't allow herself to be bound to what's expected.

My favorite chapter in the beginning had to be about her family's escape from North Korea. It was so harrowing and intense, and provided a wonderful showcase for the quality of the writing in this book. Chang is an excellent story-teller, and the passages of her growing up with her family within that cultural context shaped in the beginning and throughout the book were so fascinating and pleasurable to read. She writes about how her heritage shaped her upbringing but didn't let it determine the choices she wanted for herself, and how her parents tried to be supportive to the best of their ability.

I also really enjoyed the portions about music. Even though hip-hop isn't a genre of music I listen to, the way she describes how a powerful love for a song or genre can just take over you is relatable to any music lover. She also isn't afraid to throw shade. I've complained that too many celebrity memoirs are afraid to be mean, and end up sounding like acceptance speeches. Chang has ringing accolades for the people who stand in her corner, but she also isn't afraid to name drop the people who did her dirty, and I admired that, because it made the memoir feel more authentic, more real.

There's so much more that happens in this book-- the struggles of balancing motherhood with a career, the Shaolin monk who fathered her children, the way she hung out with the members of Wu-Tang like they were a squad of superheroes chilling at HQ, being a part of such a game-changing music scene right when it happened, and palling around with one of the Ramones... there was a lot. She says at the end that she wasn't sure if she wanted to write a book and was basically forced into it by people demanding her story, and I can see why. She doesn't have to try very hard to sound interesting because she is interesting, and she's a great writer, too.

Even if you don't like hip-hop music, you should read THE BADDEST. It's really, really good.