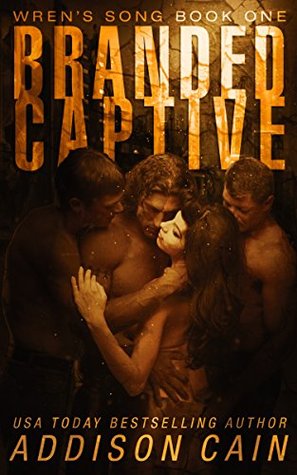 It's finally gotten to the point where I can no longer conceivably finish every book I own or am asked to review, so now if I'm not into it, I don't finish it unless I absolutely have to. I know there're a lot of purists out there who think that reviewers need to finish every single book they rate and review, but I can usually guess what my rating is going to be 99 out of 100 books I read by the tenth or twentieth page in and my opinion rarely changes by the end.

Addison Cain is an author who has been recommended to me multiple times by trusted friends who know I enjoy dark books. The only other book of hers I've read before was a historical romance, DARK SIDE OF THE SUN, which I actually didn't end up enjoying. BRANDED CAPTIVE seemed like quite a different book, though, and I'm always willing to give an author another chance if it seems like they're genuinely working to improve their craft.

BRANDED CAPTIVE is an "Omegaverse" story, which basically means that humans are in a sexual caste system with Alphas at the top, Betas in the middle, and Omegas at the bottom. Alphas have scary dicks that bloat up and "knot" while in the Omega. The Omegas build nests and sing like birds and sometimes go into sexual fugues or become amnesiacs because of all the sex cocktails. Fluids get everywhere and sexual courtship is often but not always tantamount to rape. At best, it's dubious consent. They're pretty disgusting and I don't know why I find them fascinating. I have problems.

The main character in this book, Wren, lives in a wasteland where nobody really has enough. When she was young her dad sold her virginity to an Alpha who got angry because she couldn't "knot" and had her tattooed as "defective." Wren is also mute. When she's trying to look for these two young boys she watches, she happens into an Alpha's territory and he decides to take her for himself as repayment for letting the boys go. Cue 70s porno music and stagehands holding jars of watered mayonnaise as the special effects. Did you just throw up a bit? Good.

This book is really short and I probably could have finished it, but it has the same problems as DARK SIDE OF THE SUN did. Bad writing, gross sex scenes, and bad-ass heroes who think they're hotter shit than they actually are. BROKEN by Eva Dresden was much better (I actually made it through that one). Giving this one an extra half star for being entertaining but man, the writing is crap.