The Woman Before Wallis: A Novel of Windsors, Vanderbilts, and Royal Scandal by Bryn Turnbull 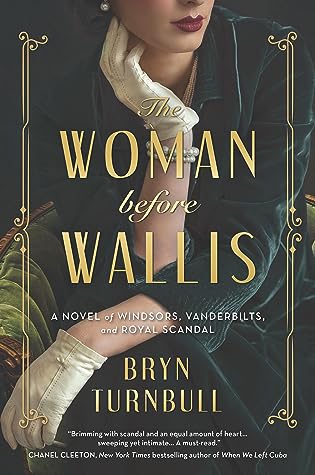 THE WOMAN BEFORE WALLIS is the first book in a while where the comparison in the blurb actually makes sense. This was recommended for people who enjoy watching The Crown and, yes, absolutely: if you enjoy watching The Crown, this book has the same juicy, high brow tone of gossip and scandal, couched in some degree of historical realism.

Thelma Morgan is one of three daughters of a social climber. Her sister has married into the Vanderbilt family, but her husband is ill from excess. One day, at a societal function, she catches the eye of a Viscount, who courts and then marries her. But after the birth of their child, her husband strays and Thelma allows her own eye to wander before it ends up settling on Prince Edward VII.

What follows is a whirlwind of romance, betrayal, and scandal, because even as Thelma begins to fall for Edward, she knows she's still tied to Viscount Furness and his family, and Edward is the heir to the throne and unwilling to displease his family by marrying an American divorcee (ha).

Thelma is forced to leave Edward when her sister, Gloria Vanderbilt Sr. ends up fighting her greedy mother and Gertrude Vanderbilt for custody in a vicious court-case of Gloria Vanderbilt Jr.-- yes, the same one who was a fashion designer. All of Gloria Sr.'s indiscretions come to light, and when her ties to illicit behavior tread too close to the royal family, calamitous information leaks that may be devastating to the case's outcome. Meanwhile, Edward is left with the dubious companionship of Wallis Simpson, allegedly one of Thelma's close friends... until she sees someone she wants.

Honestly, this was like reading a juicy television show. All the characters were so well done and even though very few of them were likable (Averill, Viscount Furness's daughter, was sweet in her way; and I also liked Consuelo, Thelma's older sister), they all felt real. I also thought the author did a good job creating a royal but approachable personality for Edward VII to show why Thelma fell for him, but also not neglecting the things that made him a terrible person (especially at the end).

THE WOMAN BEFORE WALLIS really pulls away the gilt curtain from the lives of royalty and high society and shows the tremendous pressure that comes from living under the spotlight, and how wrongs are amplified with money and power. I couldn't put this down and finished it in a single day. It was so good, so, so good, which made me tremendously happy because historical fiction can either be too dry or too frothy, and this was neither. The author's note at the end is also worth reading, as the author explains what few liberties she did take to make the story seem more concise.