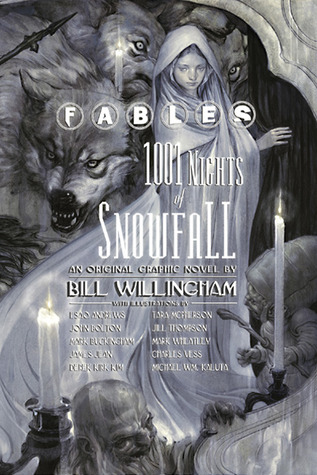 In case you haven't heard of it, Fables is a series of graphic novels-- probably more expansive even than the current Marvel movie lineup in terms of spin-offs and crossovers-- that's like a dark, noir version of Once Upon a Time. Sometimes it can be very graphically violent-- one of the spin-offs had three evisceration-- but this one is not too bad, and it's standalone, so you can just jump right in and enjoy the Grimm* ride.

*Wait, so would that mean this is Grimmdark fantasy?

1000 NIGHTS OF SNOWFALL explores the possibility of Snow White being the princess who must entertain Shahryar. She came to him as a delegate and ends up being held captive pending their wedding and execution, but saves herself by telling a series of stories set in the Fables kingdom, starting with her own.

I wasn't expecting too much with this graphic novel but I ended up loving a lot. Don't get me wrong, it's dark and triggers abound, including the usual suspects of rape and murder, but also including baby deaths, animal deaths, and torture. It isn't too graphic in most of the chapters, though, and it feels like a necessary part of the world that Fablehaven was meant to provide escape from.

I liked the detailed backstory that was given to the witch of Hansel and Gretel and the Big Bad Wolf. I liked the odd story about the forest animals that seems to be a subtle nod to Narnia. The story about Old King Cole and his sacrifice for his kingdom was surprisingly heartwarming and had a happy (well, mostly) ending. And in the background, I was fascinated by this retelling of 1001 Nights, and wondered how it would end for Snow White. Would that end happily, too?

I think anyone who is really into fairytales and dark retellings will enjoy this. There are so many different art styles in this book and I enjoyed seeing each artist showcased, and the writing is lovely and fits the whole fairytale vibe of the overarching story. I'm definitely going to explore more books in the Fables universe, especially since a number of them are available through KU like this one.