Dead of Eve by Pam Godwin 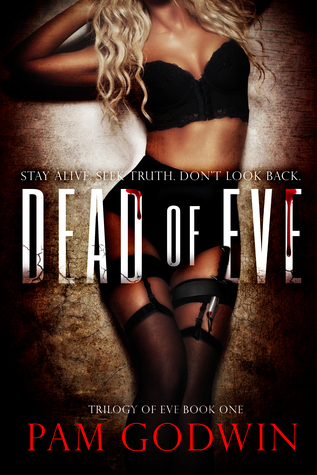 I loved this author's book, DELIVER, but nothing of hers I've read since can recapture that magic for me. DEAD OF EVE had a lot of problems, though. It's a post-apocalyptic book where a "Muslim insurgency" has unleashed a plague upon the U.S. that turns them all into bug people. The xenophobic/mutant plot kind of reads like something you would see in a 1950s Z movie, that could just as easily be called "Invasion of the Bug People" or "The Last Woman on Earth." You see, all the women have died, as the men mutated, except for Evie.

This post-apocalyptic nightmare is basically her gun nut husband's wet dream. He's prepared for this his whole life, you see. He trains his wife to use weapons but still treats her and talks to her like a child. I get that it's ostensibly because he loves her and is afraid during these terrible circumstances, but he comes across as a major ass. I'm guessing he probably dies at some point, but he's in it for the long haul in the beginning.

The book summary makes it sound like this is going to be a reverse-harem, but I read one of my friends' reviews and if it is a reverse-harem, it's a very slow to start one, because she said that by 60% in, there still wasn't any reverse-harem action. I didn't read this book for that, but if you are, that's something to think about. I was put off by the extremist themes in the book and some less-than-stellar writing. I do think this will appeal to people who like those campy 1950s movies, but that person is not me.