The Hidden History of the War on Voting: Who Stole Your Vote and How to Get It Back by Thom Hartmann 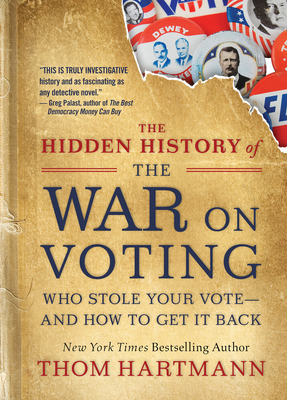 This is not an easy read and the content is upsetting. THE WAR ON VOTING is a history of how the right have systematically worked to disenfranchise vulnerable, left-leaning voters through policy and gerrymandering by letting politicians redraw districts in their favor, tossing out ballots from women who forgot to update to their married name, and tossing out ballots from people who don't have street addresses, which unfairly targets Native Americans living on reservations. These are just a few of the upsetting examples in this book, which goes all the way back to the Three Fifths Compromise and how the Electoral College arose out of those ashes.

I think it's important to learn about the history of our government, particularly if the history is unflattering or hard to hear, because we can't move forward unless we acknowledge the mistakes of the past. Hartmann cites his sources and the book reads as if it were researched extensively, which lots of examples to back up his points. I found it incredibly sad when he talks about how FOX News has taught people who are working class to parrot ideologies that benefit the rich, having successfully brainwashed them that the very policies that are put in place to help them are actually undesirable or even harmful. It's so Orwellian.

The end of the book tries to end on a hopeful note with some ideas on how to increase voter turnout and make the representation of said turnout feel more fair. I've always thought that voting day should be a national holiday because otherwise, it isn't fair for the people who work jobs that they literally can't get off (minimum wage, especially), and in some states, the hours end so early that the polls would be closed by the time their day ended. I also liked the idea of compulsory voting where anyone who didn't vote would have to pay a small fine. He mentions some countries in Europe that do this and it makes sense to me: voting should be even more of a compulsory civic duty than jury duty.

THE WAR ON VOTING is not a fun or pleasant book to read but I still would recommend it for anyone who doesn't know much about how the U.S. voting system works as it will certainly give you a lot of food for thought.