The Trouble With Hating You by Sajni Patel 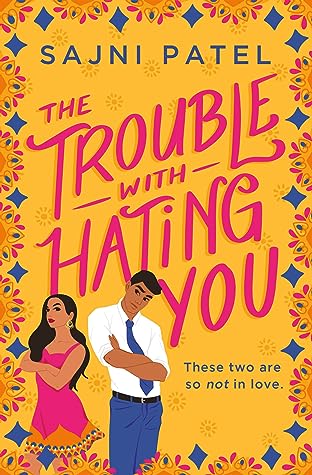 I haven't been reading as many romance novels lately, but THE TROUBLE WITH HATING YOU was such a great book to get back in to the genre with. It's one of the best romances I've read in a while, and part of that is because of a really great cast of supporting characters, but most of that is because I love, love, loved both the hero and the heroine of this romance: Liya and Jay.

Liya is a lead biochemical engineer that is in hot water. She works hard and was just given a promotion. She lives on her own, cooks, cleans, does her own laundry, but she saves so well she can afford to splurge on the designer things that make her smile. But her very traditional parents-- especially her father-- don't like that she lives on her own and refuses to marry. She has a reputation in their community for being "easy" and "too American," and so her father has decided that it's time for her to meet her match.

Jay is a lawyer and helps out with his widower mom, especially now that his older brother has gotten married and now has a pregnant wife. He's a little skeptical when he's invited over to dinner, and his skepticism only increases when he's literally barrelled over by the woman whose family he's supposed to be sitting down with. As it turns out, he's the lawyer from the firm hired to save Liya's company, but because of that terrible dinner gone wrong, they both hate each other.

I was delighted when I realized that this was a sort of Taming of the Shrew story. But when I realized it was enemies-to-lovers, I got glittering stars in my happy eyes. And the book does it so well. Nothing is rushed. Not the thawing of emotions. Not the physical affection. They start off as enemies, but then slowly become friends... and then, they become more. But it isn't easy. Both of these characters have HUGE problems in their back stories that are actually quite emotionally heart-wrenching. I felt so bad for Jay, but Liya's back story made me want to cry and punch someone.

Jay is such a doll. I'm a sucker for the caring alpha stereotypes, especially the woke ones who like strong women and treat them with respect. But Liya was great, too. She was more than capable of fighting her own battles and I loved how hard she worked to get to where she was. The supporting cast of characters was also amazing. Her friends-- Preeti, Sana, and Reema, and, later, Shilpa-- were so great. I loved Liya's mother. Jay's brother, Jahn, was also really, really nice, and I loved their mother. I think the overarching message that tragedy shouldn't be your own burden and that it's important to have a support network you can fall back on when you can't fight alone was really powerful.

While snooping on the author's profile, I saw that the next book in this series is apparently going to be about Preeti, who is a doctor and has strong feelings for a man who isn't Indian. I am so excited for that book, you don't even know.

If you enjoy great novels with PoC characters that lovingly portray other cultures, have great food imagery, feature STEM heroines, have strong friendships, handle tough subjects with delicacy, and basically just go above and beyond at building a world that feels real and will sock you right in the feelings when things go sour, READ THIS BOOK! The whole time I was reading it, I kept thinking about what a great movie it would be. When I put it down, I felt like I'd eaten a hearty meal.

Seriously, this was just great.