Members Only by Sameer Pandya 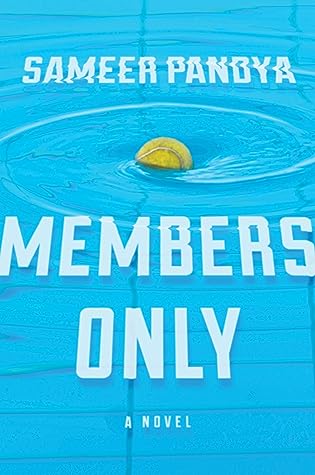 MEMBERS ONLY is the type of book that could have been hideously awkward in the wrong hands, but Sameer Pandya handled the delicate subjects inside so deftly and humorously that I was left stunned. This is honestly one of the best depictions of race I have seen in a while because of how nuanced the interactions are and nobody is really completely innocent (just like in real life). In MEMBERS ONLY, Pandya shows how the very thing that makes California so great-- it's cultural and ethnic diversity-- can also lead to some really tense and awkward interactions between people of different ethnic backgrounds.

I was yapping about this book to everyone who would listen to me because I feel like it's going to be the ELECTION of our decade. But whereas the comedy by Tom Perrotta was more of a dark satire of the WASPy suburbs, MEMBERS ONLY is a dark satire of Californian suburbs where attempts to be "woke" sometimes come across as patronizing and people from different backgrounds sometimes make unfortunate assumptions based on skin color (even with people of their own ethnic groups).

Raj, who I was picturing as Hasan Minhaj, is an untenured college professor who teaches anthropology. He's a member of the local tennis club, where he is the only member on the board who isn't white. His wife is white and they have two children named Neil and Arun. The narrative is in first person so we really get a keen insight into Raj's thought processes. He isn't a malicious individual but it's clear that he sometimes feels a disconnect between the culture he experienced growing up and the mostly-white culture he's in now. When he's uncomfortable, he attempts to deflect the situation with humor... and unfortunately, that's what gets him into trouble.

After making an off-color joke to a new applicant (of color) who wants to join the tennis club, Raj is shocked and angered when the people who have been casually delivering microaggressions to him during the entirety of his membership are now crying "racism" and demanding his membership be revoked. At the same time, students in his class are claiming that his lectures are "anti-Western," filming him without his permission, stalking him, and even staging hunger strikes until the faculty decides to fire him. With all this going on, Raj's stress levels sky rocket and he finds himself thinking about skin color and culture more than ever.

I loved this book. I won't lie and say it isn't cringe-worthy at times, because it is. There were passages in here that made me wince, and others that filled me with anger. MEMBERS ONLY is a book that is highly reflective of a country that is undergoing major cultural shifts, and what those shifts might look like for the people who experience it up close and personal every day. I would be shocked if this doesn't top best-sellers lists left and right when it comes out because it doesn't just feel topical and authentic, it's also impossible to put down. I read through it in just a few hours and then sat on reviewing it for a bit because I really wanted to meditate on its message and how it made me feel.