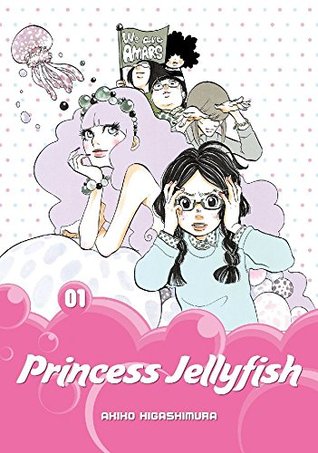 Princess Jellyfish has got to be one of the weirdest premises I've seen in manga that wasn't supernatural or fantastical in some way, and that's saying a lot. Tsukimi is an otaku who lives in a place called "Amamizukan," which they have nicknamed "the nunnery." The girls who live inside are all otaku, and all female incels, only they are proud of their incel-status, and refer to themselves as "amars," or "nuns." Each of them has a hobby that they are passionate about to the exclusion of all else-- dolls, antique kimono, jellyfish, idols-- and none of them work. They all receive income from their parents, and they live in the apartment because one of the girls is the daughter of the owner.

Tsukimi loves jellyfish because they represent one of the last deep connections she had with her mother before she died. Her mother took her to an aquarium where they both admired a jellyfish that looked like the train of a wedding dress. One day, while looking at a pet store, she sees two jellyfish in a tank but one of them has excretions that are toxic to the other (moon jelly and toxic jelly, IIRC). She gets into a passive aggression dispute with the clerk that ends in tears, only to be rescued by an impossibly beautiful woman.

The woman returns with Tsukimi to her home and Tsukimi kind of develops an awed and horrified crush on her, because someone so beautiful (she came back from clubbing!) simply comes from an entirely different social sphere than the one Tsukimi herself occupies. But the mysteries surrounding the mysterious woman deepen when Tsukimi finds out that the woman she brought back to "the nunnery" is actually a man named Kuranosuke who just happens to enjoy dressing in drag. He identifies as male and is straight, but just really enjoys doing makeup and wearing women's clothes.

There isn't really much of a plot to this book; most of it is character-driven. Tsukimi's fellow nuns are initially unwelcoming to Kuranosuke, but he manages to win them over with food and, later, makeovers. The makeovers aren't to change who they are, though. An evil real estate developer is trying to turn their property into a hotel space, and Kuranosuke dresses them up in expensive and feminine clothes as a lesson to how people are often blinded by their first impressions and biases, and how sometimes when you want to be taken seriously, you have to dress in a certain way. It could be a degrading message but it isn't because Kuranosuke compares clothing to armor, and how wearing the right clothes can make you feel powerful and even give the wearer confidence. To the kimono otaku girl, he tells her that when she's with her friends and they're dressed up, she looks like an expensive rich woman, but when they're geeked out, everyone just assumes that she's an otaku. So there's also the importance of context and scenery as well. It was very interesting criticism.

Regarding the gender norms in this book... originally, I was afraid it would be offensive and transphobic. The only other book about a straight drag queen that I've read about was L.H. Cosway's PAINTED FACES, a book that really annoyed me because of how it plucked a rapey, sexist asshole out of the normal line-up of sexist assholes and tried to make him quirky by putting him in drag. Kuranosuke-- at least in this book-- is very respectful to women, and apologizes to the one who is shocked when she catches him in the woman's bathroom while dressed as a man. He is also deeply respectful to Tsukimi and their friends and seems to embrace them for who they are. They are initially the ones who are biased against him (although they still don't realize that he's a man-- future plot drama), because they harbor that same hatred of pretty people that unhappy outsiders do.

There is a love triangle in this book. Kuranosuke's step-brother, Shu, is attracted to Tsukimi-- first when he sees her in makeup without glasses, but also with glasses, too. Shu is a deeply shy thirty-year-old following in his politician father's footsteps and he's also a virgin. Their father really hates Kuranosuke's cross-dressing, but Shu and their uncle don't seem to mind it, which is kind of endearing. I wasn't sure about Shu at first but he's very charming in his bumbling way and it's clear that he has a lot of hang-ups about his dad, and by the time that Princess Jellyfish ended, I wasn't sure who I wanted Tsukimi to end up with: Kuranosuke or Shu. They both like her and they're both really nice guys. I know, right? What a change.

I've been frustrated by a lot of the Western representations of fandom and fangirls in fiction. I think maybe it's so new that a lot of authors aren't really sure how to represent it properly and end up being overly reliant on stereotypes. I know fandom is a huge element of Japanese culture, and I can't tell you how refreshing it was to see an emotionally vulnerable, introverted, grumpy fangirl represented in a way that didn't make me want to punch through my computer screen. Her friends were way more annoying than she was, but later it starts to become a little more clear that their fandom personas are more like shields that they hide behind to protect themselves against their insecurities of being millennials without jobs whose lives revolve solely around their passion projects. They start to become way more interesting once they get out and start interacting more, which feels realistic.

I would definitely read further into this series. It's got a lot of interesting things to say about gender norms and otaku culture, most of which are far more flattering than other mentions I've seen in manga (which tend to portray both as a joke). The first volume is even free to read if you have a subscription to Kindle Unlimited.