How to Eat: All Your Food and Diet Questions Answered by Mark Bittman 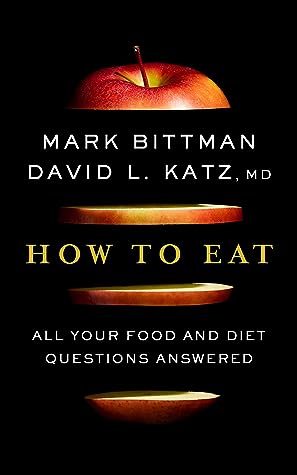 I feel like I can't go a day without some clickbait article trying to sell me on pitaya or oat milk, or telling me why veganism is good and keto is bad (or is it vice-versa??), or that all bodies are beautiful, but here are 50 signs that you need to change your lifestyle. It's really stressful... and makes us question what should be easy: what the fudge are we actually supposed to eat? (Not fudge.) The U.S. weight loss industry is worth over $70 billion and it really does feel like celebrities and influencers are constantly hawking the latest fad diet, allegedly backed by "science."

I am not a doctor but I know a lot about diets and dietary patterns and the effects that they can have on your health, primarily because of firsthand experience. I am sensitive to GMO corn (although I try to avoid most forms of it due to potential cross-pollination), and eating it makes me violently ill, similar to the way gluten sensitive people react to eating gluten. I used to get sick randomly, and I had a lot of facial and abdominal swelling. As soon as I figured out what the problem was and cut corn out of my diet, I stopped getting sick, my face actually changed shape a little, and I felt so much better-- I never used to know how some people knew when they were bloated or not because I literally felt that way all the time. As a result, I've been reading food articles and ingredient labels for a good 15 years, and have a pretty solid understanding of what I'm eating by necessity.*

*Fun fact: powdered sugar, shredded cheese, and American cheese all contain corn (it's used as an anti-caking agent) unless explicitly stated otherwise. In the U.S. it doesn't even need to be put on food labels if it's being used as an anti-caking agent or a lubricant because it's in small quantities and considered generally regarded as safe. Modified foodstarch is also corn (specifically, genetically modified cornstarch, usually).

Diets can have a huge impact on your lifestyle (as it did mine). I literally cannot eat processed foods and haven't touched most kinds of fast food in almost 15 years, so I eat better than most people I know, and I guess in a twisted way, I'm lucky, because getting sick after eating so many different kinds of junk and processed foods has given me a taste aversion to things like snack cakes and American cheese (both of which are heavy with corn), to the point where I feel no hunger when looking at them because I know exactly what will happen if I try to eat them. Most people won't have that kind of extreme, visceral response to what they're eating, so it can be harder to retrain your body-- and even know where to begin. But this book gives you a good idea of where to start.

I wish this was a textbook in high school and college health classes. It's short but it covers so much. It talks about diets and why some of them work, and the authors encourage you to think of diets as "patterns" of eating (kind of like how climates are "patterns" of weather). Whether your diet is healthy or not doesn't matter so much on the day to day (although, you know, don't go crazy), but more as persistent patterns over long periods of times. The takeaway is that most people should probably be eating diets that are prominent in fruits, vegetables, and anceint grains (kamut, farro, barley, quinoa, teff), legumes, with more sparing amounts of fish, poultry, meat, and dairy. This is not only healthier, it's also more sustainable for our overfished and overfarmed planet.

After diet, the authors talk about foods and ingredients and nutrition. Are antioxidants as good as people say they are? Yes. Are superfoods actually a thing? No, they're more of a marketing gimmick, even though some of the superfoods do have excellent qualities when incorporated into a balanced diet. The authors talk about how being gluten-free isn't actually all that good for you unless you actually have Celiac's or are gluten-sensitive (gluten-free products tend to be higher in calories, lower in fiber, and have things like corn replacing the wheat gluten). They talk about juicing diets and how you'd be much better off just eating the fruit because concentrating the juice results in a higher "glycemic load", meaning all those sugars are hitting your body far more quickly and all at once, than they would if you were sitting and chewing your food slowly at the supper table. They also talk about fats, the good and the bad, and how much salt is too much salt.

The last chapter is about research, and delves into the fake news and bunk science of the click bait world and how you, as a consumer, can navigate it. This section reminded me of a sketch CollegeHumor did called "Health Science Is B******," which was obviously written by someone who shares many of the frustrations as these authors, who urge you to be careful of revolutionary claims and how to gauge whether a study is done well and without bias.

HOW TO EAT is one of the best books I've read on dieting and the advice it dispenses is really useful. I saw another reviewer complaining that the question and answer format is repetitive, but I used to tutor and they always told us that information really needs to be repeated three times for it to really sink in (supposedly, the human brain really likes things that come in triplicate), and the information in here bears repeating. I wish I could have everyone I know read this book because it doesn't just tell you how to eat for a better you; it also gives advice on eating for a better world.