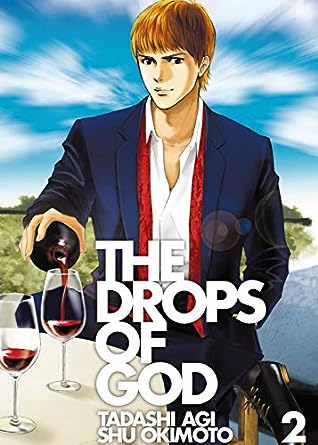 Wow! So much happened in this book, as compared to book one. You wouldn't think that the authors would be able to pack so much drama in a book about wine tasting and wine making, and yet I find myself rapidly becoming hooked. Book one of Drops of God ends on a cliffhanger, with Shizuku preparing for his tasting competition with Issei, wine critic and adopted brother, for the right to live in his father's mansion.

But then! More stuff happens! We find out who the bottle of expensive wine was for from the previous book, and the relationship this mysterious guest has to Miyabi's boss's boss (surprise: it's tragic). Then the tasting happens and we find out why Shizuku dropped the wineglass when he smelled the wine and the memories it evokes (surprise: it's tragic). And then we meet this snooty jerk who hates French wine for some reason but loves Italian wine (I mean, Italian wine is awesome) and a despairing restaurant owner who is about to destroy his wine cellar because of a single review from an evil critic (cough).

Oh-- and there's a mysterious new woman named Sara, who's a model.

I picked this book up on a whim because I love manga and I love wine and I was so curious to see how the authors would conjure up a story around this premise. I was kind of expecting a wine variant of Hikaru no Go, but this is for a much older audience (seinen, instead of shounen) and it doesn't feel nearly as one note. The story has the perfect balance of drama and heart. The characters are quirky and realistic (with multi-dimensional female characters who aren't drawn like hentai). The art is gorgeous (especially the pics of the food). But the descriptions of the wine are... lyrical.

As I said in the previous book, I think this series would be incredibly boring to people who aren't interested in wine because the entire premise hinges on it, from tasting notes to terroir. I live in California, which is famous for its wine, and if you live here, you're basically schooled from early young adulthood about the elegance of wine. You might think I'm kidding, but when out with my parent friends, sometimes they'll bring their teens along who can chat remarkably candidly about aging and barreling, even if they don't *wink* know what it tastes like *wink*.

It's so wonderful to read a book that captures the excellence of wine, and not in a snobby way, either. One of the recurring themes in this book is how interpretation is so deeply personal and layered, and how cheaper wines can be delicious enough to rival their expensive counterparts, even if some of said counterparts are truly standout enough to merit their expensive price tags. Adults who turn up their noses at graphic novels for being too juvenile would do well to pick this up and learn that there are plenty of manga out there geared towards older audiences with elegant and sophisticated writing.

Also, holy cliffhanger, Batman! You can't just end it there.