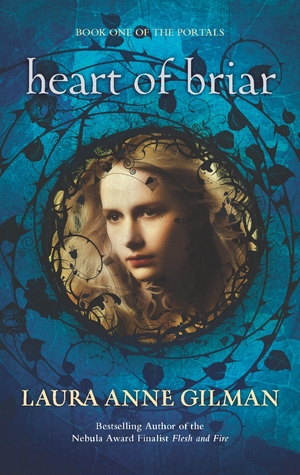 One day I was looking up Harlequin Luna books and I noticed that a lot of them are actually pretty inexpensive, so I went on a bit of a shopping spree. HEART OF BRIAR was one of the books I bought, and then I went on my merry way and forgot about it for a while until now... while I, during self-isolation, decide to take on the task of tackling my gigantic Kindle hoard.

HEART OF BRIAR is a really interesting book that kind of reminds me of Katherine Applegate's Everworld series with a dash of Labyrinth. Jan is an ordinary woman who works in tech. One day, her boyfriend Tyler goes missing and she thinks he's been cheating on her... only it isn't quite that simple. He was seduced away by a wicked elf named Stjerne who plans to basically use him up until he's a dried up husk.

Jan learns that there are two worlds: our world and Elfland. And populating both are two different kinds of immortal creatures: supernaturals and preternaturals. Preternaturals live in Elfland and come to our world to slum it or kidnap humans, but supernaturals are a part of our world. Some of the supers who end up helping Jan on her quest are a werewolf named AJ, a shape-shifter named Toba, and a kelpie named Martin.

I liked the beginning of this book a lot more than the end, although the ending was just just as good as the beginning. It was getting there, I think, that was the problem. HEART OF BRIAR reads like a self-published work in that it rambles and reads as something that never received an editor's cut (although unfortunately, being published by Harlequin, it likely did-- whoops).

HEART OF BRIAR is a retelling of The Ballad of Tam Lin, which is one of my favorite pieces of folklore. Sarah J. Maas made it famous but her retelling is weak and not very true to form. Diana Wynne Jones's FIRE & HEMLOCK is probably my favorite version of the tale, but this one is also quite good once the story finds its feet. Jan is a very strong heroine with real weaknesses and her confusion and betrayal throughout this ordeal are both very well done.

I guess how much you enjoy this book will depend on how ok you are with infidelity, as the book opens with Jan's boyfriend disappearing and her finding out he's strayed, and then on her quest to find him, she spends most of it fighting her attraction to the Kelpie Martin. I did like the message that there are different kinds of love and that you don't need to want to even physically be with the person you're saving to care about them enough to rescue them, which was an unusual message to see in a romance novel and actually kind of refreshing, but considering that Luna was Harlequin's fantasy romance line, there really isn't a whole lot of romance in this book.

I read Laura Anne Gilman's Retrievers series when I was young and felt about the same about it as I do about this one. She's a good writer who creates strong heroines but her stories often feel like they don't know what they're about. Still, if you love unusual world-building and retellings of Celtic and British folklore, you'll probably enjoy HEART OF BRIAR. I already bought the sequel.