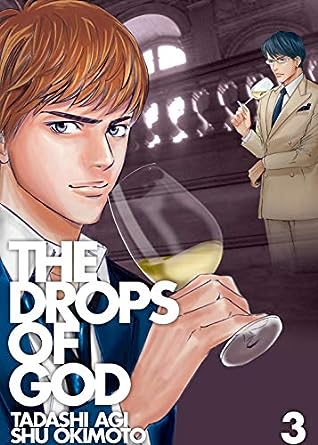 Have I mentioned how obsessed I am with this series? Seriously, anyone who thinks that manga is for young people only needs to pick up a copy of The Drops of God. It's an amazing manga series about a young man (twenties) named Shizuku who is the son of a famous Japanese wine critic. Finding out his old man died comes as a triple threat: not only was his death completely out of left field, he has to compete for his inheritance against an adopted brother he didn't even know about: another famous wine critic named Issei.

Most of these books seem to end on cliffhangers but the writing and story-telling are soooo good. If these aren't an anime or a drama already, they should be. The writing about wine is so poetic and even if it comes across as hammy at times, you really feel like the writers are passionate about wine-drinking and wine-tasting, or at least have done their homework on it.

My worry with this series was that the authors would run out of ideas since the concept seems like it would be one-note, but so far, that hasn't been the case either. The current dilemmas in this book are finding low budget French wines to win a wine contest against low budget Italian wines and helping a restaurant owner who received a scathing review from a critic (Issei!) win over the critic by redoing the menu/pairings.

One thing I love about this series is how the manga keeps letting you think it's going to fall back on old tropes, only to pull the rug out from under you. Without saying too much, let's just say that this book could have easily gone down the "restaurant critics are meanie meaners who only want to destroy businesses!" route, but it totally didn't. Part of the arc is about learning not to be too proud to face honest (albeit scathing) criticism, and that even as a professional, you should still be learning and honing your craft. It was a surprisingly poignant message, accompanied with gorgeous drawings of food and some excellent passages about the marriage between food and wine.

People often speak condescendingly of table wines, but it is true that the wine you enjoy with food isn't necessarily the type of wine you would want to drink by itself. There is nothing wrong with table wine, and the meal you enjoy a wine with can bring out unexpected and pleasant flavors (and vice-versa). I also liked the part about how not all shellfish can be paired with all white wines, and the dilemma with the Chablis and the oysters struck a personal chord with me because I was actually at a restaurant where they were serving champagne with oysters and it was the type of champagne you drink by itself (lightly sweet, airy) and it tasted HORRIBLE with the oysters and made them bitter and fishy! I thought there was something wrong with the oysters, but after reading this book, I'm now certain that it was just a poor match between wine and seafood. Amazing.

Anyone who enjoys food and wine will love this book, as it really speaks to one's inner-foodie. If you don't like wine or reading about wine, you will likely be very bored with Drops of God and that's fair. It's not a manga for kids or for people who like kids' manga, and I'm honestly saddened that more people don't know about it, as I think it could definitely find its niche among millennials. I was looking into this series and apparently in Japanese and French, there are 40+ books available, but in English there are only 11 published? GUYS. You gotta get on this train and show the publisher that there's a market for it. I need to find out how this all ends. Do me a solid and read this fucking series.