What I Did for a Duke by Julie Anne Long 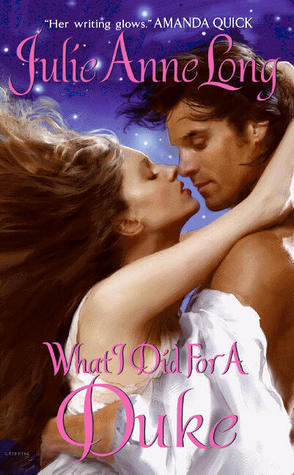 I've been wanting to read WHAT I DID for a while because it showed up on a whole bunch of interesting list, like grumpy sunshine, villainous hero, and revenge-themed, which are some of my FAVORITE tropes (notice a theme here), so obviously I was intrigued. As soon as it went on sale, I snapped it up and was hooked immediately from the beginning when the titular Duke, Alexander Moncrieffe, catches his fiancee in bed with another man. That man, of course, is Ian Eversea.

Furious, Moncrieffe breaks off the engagement (in a really intense, darkly funny way) and swears his revenge. But rather than calling Ian out directly, he decides he's going to ruin one of his sisters as well. But which one?? He has two.

Genevieve Eversea has just had her heart broken when her unrequited childhood crush, Harry, announces his intentions to propose to Genevieve's friend, Millicent: the curvaceous, pretty drawer of kittens and all things good. When Moncrieffe starts to flirt with her at the ball, she's immediately wary and suspicious and TOTALLY not in the mood, but their cagey banter is so interesting. It's like watching someone juggle chainsaws, how neatly they sidestep all the danger. And then-- just when I thought the story was going to go one way, it went in a totally unforeseen direction.

I. Loved. This. Book. The banter was so good, and so intelligent. The humor was really well done, without making the book seem too silly or too forced. The way Moncrieffe tortured Ian continually was utterly hilarious and made me laugh out loud several times. The sex scenes were fire. There was literally nothing I didn't like about this book and honestly, if you ask me (which you totally didn't, but I'm gonna go ahead and give my two scents anyway), instead of making Bridgerton a TV series, they should have adapted Pennyroyal Green instead. #MakePennyroyalGreenATelevisionShow2022

I can't wait to read the other books. Alex Moncrieffe is going to be living rent-free in my head for a while.