Art of Atari by Tim Lapetino 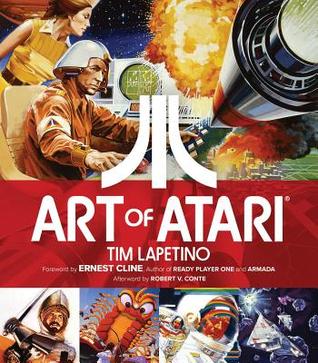 I think I'm older than a lot of my followers by about ten years, so I actually am old enough that Atari games were still in circulation when I was a kid. I also played some old skool arcade games when they were still being placed organically and not as a gimmick in a barcade (note: barcades are awesome-- there are at least two super fun ones in San Francisco and they are AMAZING). Naturally, when I saw that a book of Atari art was free to read on Kindle Unlimited, I flexed that subscription hard and dove right in.

First, a note. Some art books translate pretty well to ebook but this one does not. I couldn't easily get the pages to enlarge and the contrast of the white pages and the gray text wasn't great. Especially since the text was SO SMALL. So this is not a book I would recommend getting in ebook, but I would recommend getting it in hard copy if you can find it, because it is A-MAY-ZING.

This book features really high resolution pictures of advertisements, game box art, and even a bonus section in the back with pictures of prototypes. There's artist profiles that feature samples and quotes from a lot of famous Atari artists, and behind-the-scenes tidbits like office memos and alternate game box designs that really make you feel like you're getting some serious insider info. Even though I couldn't read a lot of the text, the art alone makes it worth it, IMO. It's peak 70s cheese, but what gorgeous cheese it is!

As others have mentioned, this book is not exhaustive. It doesn't go super into detail about the game crash (although it does mention it, replete of photos where they excavated E.T. games from the dump where they'd been, well, dumped) and for some reason, it doesn't mention the X-rated Atari games that were basically an open secret at certain game stores. One of my favorite YouTubers, the Angry Video Game Nerd, does a video where he tries some of these out. It's hilarious.

If you like video game art and coffee table books, you'll love this. Just maybe don't get it on ebook.