The Countess Misbehaves by Nan Ryan 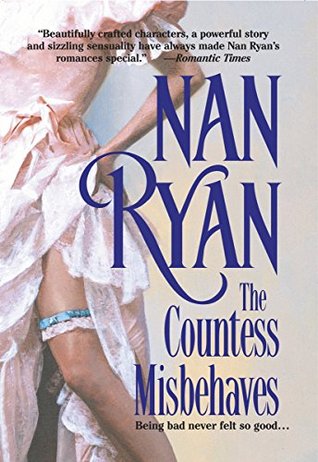 This book was CRAZY. Like, over-the-top bodice-ripper crazy. I'm actually a little shocked that it was published as late as 2000 because it was super un-PC in the way that you don't usually see in more recent publications. It starts out pretty intense, with the heroine, Madeleine, a countess, boarding a pleasure ship and locking eyes with a Creole playboy named Armand. From here, it sort of takes a Titanic turn where they exchange fuck-me eyes while sort of hating each other and when Madeleine tells him to go jump off the ship, he prepares to do exactly that. When the ship is stuck in a hurricane, Armand and Madeleine are stuck aboard and decide to have "oh no we're going to die" sex. Then they encounter a ship with room for just one person, and Armand lets Maddy go ahead, prepared to go down with the ship. You know, like a gentleman.

A year later, Madeleine is engaged to a lord named Desmond. And Armand is alive, rescued by a Cuban ship, and newly emigrated from Cuba. He keeps the heroine's garter on him at all times as a sort of good luck charm, which-- excuse me-- is super hot. I loved that he wore it on his bicep. I MEAN CAN WE TALK ABOUT HOW HOT IT IS WHEN HEROES ARE OBSESSED WITH THE HEROINES? THANK YOU. He's not super happy that Madeleine has moved on and when he finds her in New Orleans society, he proceeds to wink-wink-nudge-nudge taunt her with his existence at every possible turn and, yes, it is super hot.

Even though Armand is technically the OM, it's okay because Desmond is a total heel. He's cheating on her with a biracial mistress (the book refers to her repeatedly as a "quadroon"). And of course, she's into voodoo. They actually go see this voodoo queen to curse Maddy's uncle at one point in the book, which results in a ritual where they watch a greased-up girl fuck a snake and then a statue, while chugging voodoo wine. When it's over, they take Snake Girl home for a threeway. Because, you know, #swag. Desmond is only marrying Maddy for her money and he thinks she's a frigid bitch so he keeps his hot Black mistress on as a sidepiece and only the matter of a provisional will makes him think marriage necessitates covering all his bases. Although if he can burn the new will, kill the uncle, and then get rid of Maddy, marriage becomes sort of redundant. #LongLiveTheDommeSidepiece

So I'm kind of shocked that this book has such low ratings because it's incredibly spicy and so extra, but it is racist and it is porny, and that seems to be the issue most people had with it. So yeah, if kinky sex isn't your cup of tea and you don't want to be hammered over the head with voodoo fuckery and Deus Ex Black Servants Who Save the Day Because They Love Servanting So Much, definitely don't read this book because it is all that and more. On the other hand, I almost kind of admire the book for being THAT over the top and giving so few fucks. Plus, Armand is bae. I think this might be a keeper.