The Warrior Trainer by Gerri Russell 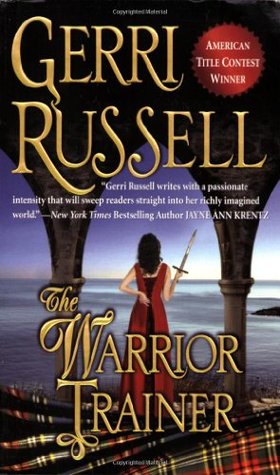 This book is like a cheesy 80s fantasy movie and I mean that in the best way. Seriously, if you dig the sword and sandal vibe and were a fan of the Xena: The Warrior Princess TV show, you're going to love this. THE WARRIOR TRAINER is a kind of wallpaper medieval historical romance set in Scotland. The heroine, Scotia, is a warrior trainer. Just one of many women in a long line of warrior trainers. I guess they just train heroes and protect this magic stone thingy called The Stone of Destiny. Whatever, I can vibe it.

The hero, Ian, is from Clan MacKinnon in Scotland. Like the heroine, he has firsthand experience with the Four Horsemen, the evil British raiders who are tormenting the Scots and take a savage glee in torturing and razing their citizens just to prove dominion. He comes to Scotia to learn from her and develop his skills in order to prove his worth as a seasoned warrior and one day become a leader for his clan.

This was just... so good. There was so much I loved about this book. The heroine was so strong. I loved the fight scenes, the training sequences were just begging for an 80s hair metal montage, and her armor was envy-worthy. I also loved how the hero was so devoted to her, admiring her not just for her beauty but also for her skills and noble heart. The fact that he worshipped the ground she walked upon was seriously #goals. Add to that really intense action scenes, some quote-worthy dialogue, and some really great morals, and you have a recipe for a book that would make a kick-butt movie.

The only thing that was really lacking in this book, for me, was the romance. I just didn't really feel the chemistry between Scotia and Ian. I liked them both a lot as people but they just didn't ZING. That was okay though since everything else in the book was so cool. I seriously lived for the passages where Scotia schooled Griffin and other would-be challengers who totally deserved posts on r/gatekeeping. This is the girl power epic I didn't even know I needed and I've already bought the rest of the trilogy.