Wanting You by Nan Ryan 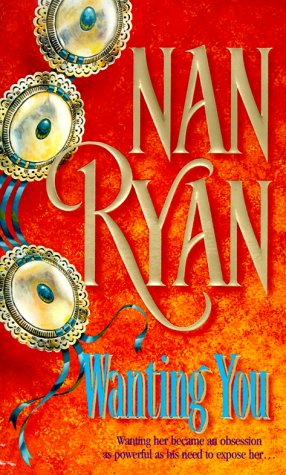 Picture Don Bluth's Anastasia, but set in the Old West, with a morally ambiguous hero and lots and lots of purple prose and bad sex, and that's WANTING YOU in a nutshell. And if you're thinking to yourself that that sounds like a bad thing, you are wrong. It is SO MUCH FUN.

Mary was taken captive by some culturally insensitive Native American stereotypes when she was young, only to be rescued and sent to a convent. Because nothing cures Stockholm syndrome like a heaping dose of Jesus. When she's older, someone happens to notice that she matches the description of a young blonde girl who was carried away by Native Americans around the same time that she was-- and that young girl just so happens to be the heiress to a big-ass farm called The Regent. DNA test? Pshaw. Those haven't been invented yet. She's female and has the right hair color. Must be her. Don't ask questions.

Mary-- now, Anna-- is ferried off to the Regent where the matriarch, LaDextra (yes, that's her real name) welcomes her with open arms. Less enthused about her homecoming is her hot stepbrother, Brit, who would have been heir apparent until she conveniently turned up. Other people have pretended to be the heiress to get that sweet, sweet cashola and he's convinced she's more of the same, just in better packaging. Much better packaging. He's determined to chase her off-- possibly after he has sex with her first. This is a bodice-ripper after all. Standards must be upheld and packaging must come off.

What ensues is honestly a pretty hilarious enemies to lovers romance. Hilarious because only parts of it were intentionally hilarious. The best part of this book is watching Anna and Brit dance wary circles around one another while unsuccessfully trying to fight off their attraction. At first the sexual tension was meg spicy, and I was like yAAAAS. But then we get to the actual sex scenes and there are references to "the hot, thick liquid of love" and other yucko euphemisms where you might as well just say jizz or cock (come on, we're all grownups here). So that was some major points off from Gryffindor, although I managed to lolz my way through some of the other faux pas(sy).

Overall, this was a pretty fun book. I read it to the end and enjoyed it, but I think I liked her other book, THE COUNTESS MISBEHAVES, much better. That book is a keeper. This one is not. The image of Brit sleeping naked in the woods while wearing only a strategically placed cowboy hat can live rent-free in my head, though. He should change his name though. Brit Caruth sounds like one of those villages in Wales where all the locals get pissed off at British news anchors who can't be bothered to pronounce it properly.