Heaven in His Arms by Lisa Ann Verge 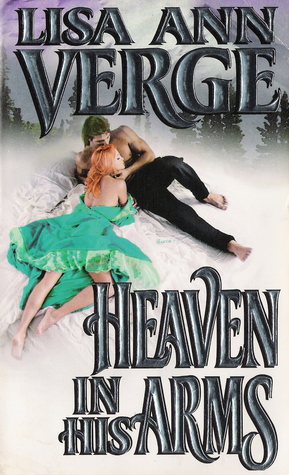 My friend Heather was raving about this book which naturally made me want to read it, too, because I think she has excellent taste. I got HEAVEN IN HIS ARMS years ago when it was free on Kindle and then it ended up being just another book on my to-read long list. But I decided to bump it up and give it a shot because I was in the mood for something historical and epic, and I'm so glad I did.

The premise is really interesting. The heroine, Genevieve, is living in the Salpetriere in France, which is kind of like an orphanage/working house for girls. She switches places with a king's girl, Marie Duplessis, who is slated to be shipped off to Quebec to marry a fur trapper who needs a wife to keep his license. Marie is in love with a Musketeer. Genevieve, on the other hand, simply wants a way out. Marie is a noblewoman and even in a place like the Salpetriere, she receives special treatment. Genevieve, on the other hand, knows far too well what life on the streets is like and has absolutely no desire to go back to it.

Cut to Andre who is NOT happy about his wife situation for ~reasons~. When he sees the girls fresh from their boat trip over, he picks Genevieve because she looks sickly and he figures she'll do him the favor of dying before he has to really commit himself to the relationship. I know what you're thinking-- WHAT A CAD. Well, so does Genevieve, who tracks him down and does the 1600s street waif version of "ARE YOU FREAKING KIDDING ME RIGHT NOW?" which goes down about as well as you'd expect.

So let's talk about why this book was awesome.

❄️ Marriage of convenience AND enemies to lovers. I don't think I need to elaborate on this one, but just in case I do, OH LOOK IT'S TWO OF MY FAVORITE TROPES COMBINED. And what makes it better is that they're both on even footing and the way they try to get revenge on one another is utterly hilarious. Genevieve doesn't let Andre get away with anything and has some of the best one-liners in the book. You just have to love her. You just have to.

❄️ Sensual sex scenes. Yes, sometimes they delve into purple prose territory, but that basically comes with the genre. I thought the author did a really good job ramping up the sexual tension between the hero and heroine and making the attraction based on more than just physical stuff.

❄️ Beautiful, lush descriptions of the Canadian wilds. Honestly, some of the best passages of this book were the vivid descriptions of nature. Whether it's dense forests, virgin snowfall, or icy lakes, I was eating all of this nature love up with a silver spoon. So beautiful, and it really made the setting feel unique and personal in a way that a lot of wallpaper parlor historicals don't. I loved that.

❄️ The heroine has a pet beaver. I'm a sucker for the animal sidekick trope when done well. Also, the beaver gets his own HEA at the end with a beaver wife and beaver kids. HEARTS.

❄️ Also-- can I say how refreshing it is to see a non-virginal heroine in romance? Seriously, even though I'm guilty of this myself in my own writing, I really appreciate books that actually DARE to make the heroine experienced or, at least, you know, not a total innocent. Especially when it would be totes unrealistic for their given situation, which it would have been in Genevieve's. Which brings me to one of the last FAVORITE THINGS about this book for me.

❄️ Dark, angsty backstories. I'm such a sucker for this. GIVE ME ALL THE ANGST. If a book makes me feel feelings, the book has done a good job. It's as simple as that.

So why didn't this book get a full five stars?

It took me a while to get into and sometimes I found the book a little tedious. I really enjoyed reading this book a lot but I'm not sure I'd pick it up again. It just didn't quite click with me on the level that guarantees a book on one of my favored spots. That said, I'll definitely be checking more out from this author. Man, can she WRITE.