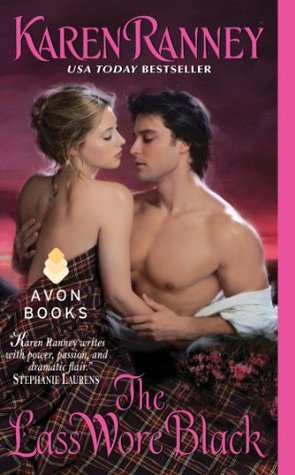 This is my first Karen Ranney book but it isn't going to be my last. I'm a sucker for Beauty and the Beast retellings and I was really interested that this was a gender-swapped one where the woman is the "beast." Catriona is apparently the spoiled sister of the heroine in the first book. Renowned for her beauty, she is accustomed to men dancing attendance on her. All that changes when she gets into a carriage accident that damages her face. Suddenly, she becomes "the lass in black," veiled and locked in the shadows, willing herself to simply fade away.

Catriona's aunt is obviously super concerned about this, and since her niece refuses to see physicians, she hires one on and tells him to pretend to be a footman. Mark Thorburn complies, because he studied under Catriona's father and remembers her for the beauty she was. He's both intrigued and frustrated by her childish bitterness and decides that he's going to help her eat again and regain her former strength.

So this book ended up being a really pleasant surprise for me. I love hidden identity tropes when they're done well and Dr. Mark Thorburn is actually a pretty nice guy for the most part, even though he isn't perfect. Looking at the reviews, people were much harder on Catriona, but I honestly felt like her depression and grief was portrayed very realistically. People only ever paid attention to her because of her looks, which allowed her to coast on her bad personality. When she lost her looks, she felt like she really had nothing to offer, and wallowed in her selfishness. A big part of her getting over her grief was learning that she had so much more to offer than what was on the surface, and part of that was learning how to give to others and volunteer and do charity work, which was actually really, really sweet. She realized that even though she had scarring, she still came from a life of privilege, and had tons of opportunities open to her that she was squandering. I actually loved her character a lot and it made me sad that so many people were anti-Catriona.

As for the story, it was really well done too. It's largely character-driven as Catriona learns to find value in herself again, but there's a mystery element too revolving around Catriona's carriage accident and a sinister figure who wants to take revenge on her for past wrongs. I felt like Ranney struck the perfect balance of tension and romance and I am really looking forward to checking out her other books.