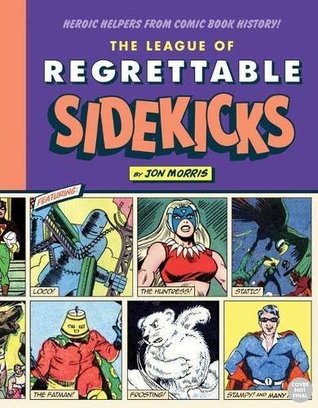 I bought all three books in the League of Regrettable series when they went on sale. I was told that "Sidekicks" was the weakest one of the three, so I decided to start with that one because you know what they say about expectations. Right away, I could see what the critics meant. REGRETTABLE SIDEKICKS is exactly what it promises to be: a collection of some of the more poorly thought-out sidekicks in comic book history, divided into the gold, silver, and bronze ages of comics.

At first, I was pretty amused. I don't read a lot of comics and therefore hadn't heard of most of these guys and gals before. Some seem like product plugs for kids (a polar bear named Frosting), and others like the writers were running out of creativity (an adult man cruelly named Fatman who wears a lampshade on his head). I also learned a lot about comics I had no idea existed, like Bob Hope and Mr. T comics, a series called Jeep about a flying jeep, and superheroes with names like Minimidget and Doll Man. LOL.

The problem with this book, I think, is that these are sidekicks to more established superheroes, so they don't have the same WTH factor as some of the ones about off the ball superheroes and supervillains, who play more of a crucial role in the plot rather than serving as pure filler, and therefore provide the book with more material. Personally, I found a lot of these sidekicks to be hardly noteworthy. One of the few that shocked me was Supergirl's horse sidekick, Comet, who's actually a man in a horse body who turns into a man when there's a comet and uses that as an excuse to date Supergirl. Wat. I think that's the sort of juicy zaniness I was expecting with this book, y'know.

I'm looking forward to reading the other two books but this one was not a keeper.