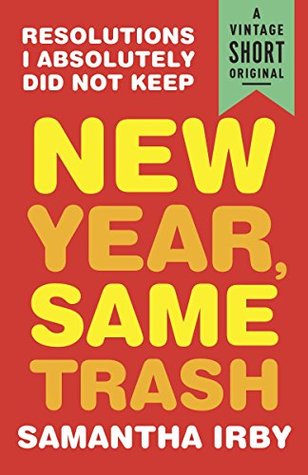 This is pretty short for a "book," but all of the positive reviews said it was worth it. So I was like, "Here Samantha Irby, have my coin." NEW YEAR, SAME TRASH reads kind of like a published blog piece in which Irby details some of her new year's resolutions and how she failed to keep them. Whether it's eating healthy, traveling more, or learning how to adult properly, sticking to your goals is #hard.

I honestly found this pretty humorous and found myself chuckling several times. I feel like Samantha Irby is me, only she's, like, a superior evolution of me. Like, she is the anxious Charizard to my anxious Charmander. I found it incredibly relatable how she cancels plans to stay at home and read trash in dirty socks (YES), and harbors an unreasonable fear of speaking on the telephone (I let everything go to voice mail and then just text people back). I also have a Tumblr, allegedly, because I receive emails about my Tumblr, but I never use it because people on Tumblr scare me and also I'm seriously uncool and don't feel like I'm funny enough or young enough to be posting on there. The only thing I can brag about is eating pretty healthfully but that's only because I have some pretty serious food sensitivities that are conveniently found in most processed or fast food, and because of what happens to me when I eat them, I've developed such a taste aversion to these things that just smelling them can make me go UGH.

It's less than fifty pages long but I consider this 99 cents well spent. I think it would be especially fun to read at the end of the year when you're planning out next year's resolutions while contemplating last year's failures. And by "fun" I mean masochistic, but hey, whatever works, right?