The Warlord's Mistress by Juliet Landon 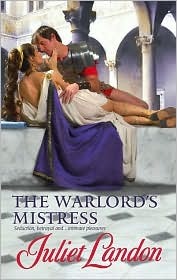 I bought this on impulse because I liked the title and you just don't really see many romance novels set in the ancient world. As soon as I found out this was set in ancient Rome, I was like YAAAAAAS. Also, it doesn't hurt that this edition also has a gorgeous stepback featured in black and white on the inside cover.

THE WARLORD'S MISTRESS is about Dana/Dania, a Celtic woman living in what I believe is Wales. She is part of the Boar Hill tribe and a member of the Briganti, traditional folk who worship Brigid and other Celtic gods. She is a very young woman who has been in a marriage with her husband, Con, for a year. In that year, her husband has been a real tool and she hasn't born him any children. According to tradition, that means they can separate, but Con's father, the druid, thinks it would be real neat to sacrifice her to the gods. You know, for funsies.

Luckily, Dania's father is the chief and he intervenes. No, he says, let's sacrifice Con instead. After a panic, it's decided on a compromise. Dania will leave her clan and act as a spy for their tribe to observe the Romans several towns over in their outpost in Coria and gather intel. They brand her to prove her loyalty and keep her from fraternizing. At first, she is a weaver but she finds out it's more lucrative-- and empowering to other women-- to start and run her own brothel, where she also doles out medical treatments and advice, and has the ear of some of the most influential Roman soldiers in the area. Call it a win/win.

But that's until Fabian enters the scene. Fabian is a high-ranking tribune and he doesn't think that Dania is as innocent as she pretends. He's also attracted to her AF and won't take no for an answer. In this house, we stan an alpha hero who isn't rapey but knows how to be a Sexy McManlyman. I loved the intrigue elements and how strong Dania was. A lot of Harlequin romances can feel very dialed in and have a sort of "painting by the numbers" vibe to them, but this one was so fleshed out and I loved all of the action and side characters. You really feel for Dania and how she's pulled in both directions, both by her brother, the new chieftain who has become corrupted with power, and Fabian, who has a soft spot for her but is ultimately motivated by ambition and duty. It's a dangerous, delicious game.

Also, there's some pretty steamy scenes in here. Like, polish-your-glasses/it's-getting-hot-in-here steamy. I was not prepared for this level of spice. It's a damn shame too because none of my friends have read this author and I'd never even heard of her, but after thrifting this book and loving it, I'm probably going to get the rest of her works on Kindle. This was just pure, self-indulgent fun.