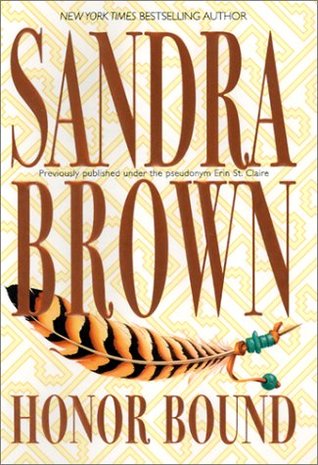 Sandra Brown is one of my go-tos when I'm in the mood for alpha heroes and this book was on a list for villain love interests, so obviously it took me about 2.5 seconds to be all over that like green on grass. At first, it was a pretty decent read. The hero, Lucas Greywolf, is a half-Native American man who has escaped from prison to say goodbye to his dying grandson. We learn later that he was wrongfully imprisoned at a protest because he wouldn't narc on anyone. He's not completely Mr. Nice Guy-ish, though; case in point, he takes the heroine, Aislinn, hostage to ensure his own means to an end.

The first half of this book was a three star read. It kind of had an Anne Stuart vibe to it and I liked the gamma hero, who was, admittedly, hot. Aislinn was annoying but at least she made a pretty bold (if ill-thought-out) attempt at escape, and had realistic-ish reactions given her circumstances. I didn't need to be reminded of the ethnicities of both characters 50,000 times, but okay, go off.

The second half of this book is where it takes a nose-dive for me. I didn't realize that this was going to be a secret baby romance when I bought the book, which is probably one of my least favorite romance tropes out there. The second half is where all the un-PC stuff starts to get really yikes, too. Modern readers aren't going to like that the NA hero is repeatedly compared to animals and at one point is described as "primitive." Their marriage is also a big screaming case of "man, should these two people ever NOT be together!" See you at the divorce court in 5 years. Sadly, the secondary romance between Lucas's mother, Alice, and the doctor, Gene Dexter, were probably the best part of Act II.

I keep trying to get into Sandra Brown's books but something about them always ends up putting me off. The only book I've really enjoyed of hers is SLOW HEAT IN HEAVEN (which I really need to find in paperback again). Hopefully one day I find another book of hers that strikes that happy medium between alpha jerk and sexy escapist romance, but this wasn't it.