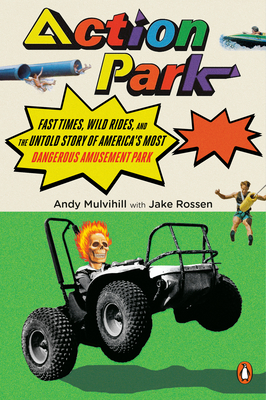 I was incredibly curious to learn more about Action Park after watching the Netflix documentary Class Action Park (2020), which painted Action Park as this sort of Wild West of theme parks, where anything went-- the food was prepared in unsanitary conditions, the teens shacked up in the pump shed, and the riders were the sort of dangerous that make you think of dystopian futures like The Hunger Games where people fight to the death for entertainment. Add to that the fact that the founder of the park came across as a horrific hybrid of Willie Wonka, Donald Trump, and Clark Griswold, and you had yourself a hot mess of a, well, class action lawsuit waiting to happen.

ACTION PARK is written by the son of Gene, Andy Mulvihill, and unlike the documentary, which tries to represent all the sides, Andy tries to sort of paint his dad in a more sympathetic light. I'm not sure he successfully does that, though, as the creation of the park comes across as a speeding train wreck waiting to happen. You know it won't end well and that you won't like what will happen next, but morbid fascination compels you to watch to the bitter end. The story is just that fascinating.

The park initially started as a sort of ski slope, but Gene wanted something that would generate year-round profits. Accidents started happening basically each time a ride was created, but Andy's father didn't believe in setbacks. His Ayn Randian philosophy that everyone should be able to do whatever they want, and curse the consequences, results in a pretty laissez faire take on park enforcement-- by which I mean, virtually none-- where people can careen down slides at high speeds on flimsy toboggans or jump from cliffs into freezing cold water at dangerous heights, whether they know how to swim or not. Andy details the setbacks, the injuries, and the lawsuits that were caused by the park, and how they changed the perception and development of the park as time went on, eventually resulting in bankruptcy.

I really liked this memoir. It looks like maybe there was a ghostwriter involved based on the Goodreads credits, but together Andy Mulvihill and this other author did a good job telling the story of the park in an engaging and interesting way. Some of the critics have claimed that Andy comes across as self-congratulatory and kind of like an apologist, but everyone sees themselves as the hero of their own story, and Gene Mulvihill did seem like a larger than life character, even on paper. It was kind of easy to understand why he got away with some of what he did, because of his daring and his charisma.

If you're interested in the stranger-than-fiction genre of memoirs that tell wild stories that also happen to be true, I think you'll really enjoy ACTION PARK. It is a compelling snapshot of a time that is both nostalgic and cringe-inducing by turns, and I found it to be nearly unputdownable.