The Crystal Heart by Katherine Deauxville 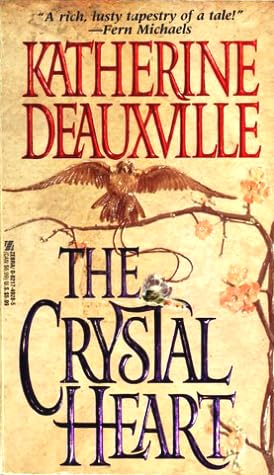 After reading and enjoying BLOOD RED ROSES, I was eager to dive into more of this author's work since apparently all I want to do is read all the medieval romances. THE CRYSTAL HEART is set one generation after, I believe, referencing some of the events of BLOOD RED ROSES and even a few of the names (like de Jobourg), and, like BLOOD RED ROSES, it is set in Morlaix. It is, however, a standalone and reading the other books is not necessary for understanding.

The heroine, Emmeline, is married to a goldsmith old enough to be her father. She is unable to get with child so has some men find a man off the streets to do the deed. The man is the illegitimate son of a nobleman, a young and awkward knight named Niall fitzJulien. They have a night of incredible passion and then Niall is drugged and taken away and the product of their union is a boy named Magnus.

Ten years later, they meet again. Niall is now a baron in his own right and Emmeline is a respected member of the town. Niall is still furious at being used and forced a marriage with Emmeline, where he proceeds to treat her pretty badly. BLOOD RED ROSES followed a similar trajectory so I wasn't as shocked by this as others were. I will say that it is more of a romance than the other book, even though it is a dark romance, and the sex scenes are pretty spicy (as long as you don't mind dub-con/hate sex). That said, if that's not something you enjoy, you won't like this book.

Even though THE CRYSTAL HEART is shorter than BLOOD RED ROSES, I did more skimming. I really did not like Emmeline that much and Magnus, the son, was bratty and annoying. It felt like there was a lot of filler in this book, including a subplot with King Henry and Eleanor of Aquitaine antagonizing each other and a secondary romance of sorts that probably could have been left out. There were some fantastic action scenes and at times the story could be very dark, but there was also a lot of stuff that bogged down the plot and overall it felt much less polished than BLOOD RED ROSES.