Aggretsuko: Metal to the Max by Daniel Barnes 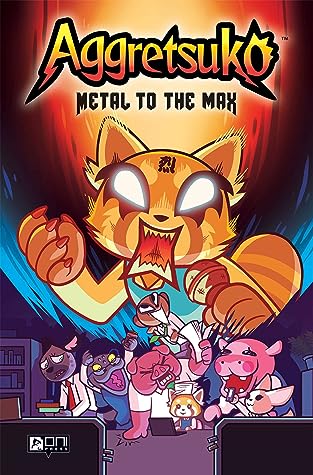 These Aggretsuko comics are kind of the best! I had never even really heard of this character until my friends started recommending the books and the show to me. It's about a little red panda named Retsuko (the title of the book is a portmanteau of "Aggressive Retsuko") who is a struggling office worker who lets off steam by singing metal band karaoke in the evenings (and she's really good, too!). Also, SHE IS SO CUTE. <3

One thing I am really liking about this books is that they capture the fun, wholesomeness of Saturday morning cartoons but updated to reflect adult situations. This short comic book is spliced into three storylines. The first one is about how annoying it is when sick people come into work, only this problem has been reworked into a fun zombie parody. The second story is about annoying friends who are richer than you and conspicuously display their wealth while expecting poorer friends to do the same. The last story is about well-meaning HR flunkies trying to boost morale without really getting to the root of what employees are used to or might want. There's an unexpectedly sweet and wholesome twist at the end.

Prior to this book, the only comic about cube culture that comes to mind is Dilbert, and I don't watch or read Dilbert anymore because Scott Adams is an asshole. This book has the same sort of jaded ennui but it's less cruel. It's also set in Japan, and reflects Japanese cultures and attitudes when it comes to work (bowing, obeying superiors, etc.) but I think it translates really well to Western culture too-- especially for overworked millennials who might feel burned out and powerless. I'm two comics deep now and thinking that I really need to watch the show. Anything this cute and smart deserves attention.