The Mermaid of Penperro by Lisa Cach 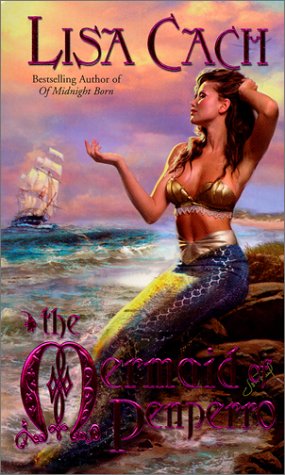 The premise is pretty cool, I guess. The heroine, Konstanze, is the daughter of an opera singer who died prematurely, leaving her to marry a much older man. The man courted her and treated her kindly at first but then shed his cloak as a gross abuser after they were married. She ends up fleeing to Penperro and getting involved in some scheming. Which involve pretending to be a mermaid for ~reasons~.

I wanted to like this book but the writing was, well, really bad and the cutaway scenes were so choppy, it was hard to figure out what was going on, when the plot was going forward and back in time, and when one scene had ended and another had begun. I couldn't tell if it was bad editing or if maybe this book had been rewritten and stuff had been cut out (which sounds silly, but just read some of Fern Michaels's repackaged bodice-rippers where the non-con bits are basically just lopped out and left to an abrupt fade-to-black or edited dub-con and you'll see what I mean).

I'm not writing this author off because I know I like some of her other books (and I own CHANGELING BRIDE) but this one was sadly a miss for me.