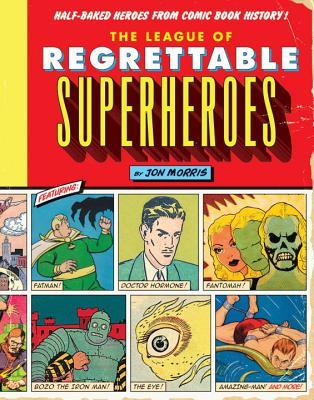 Quirk is one of my favorite publishers so when this book popped up on their website, I knew I had to have it. I'm not a huge comic book reader, but I do find the history fascinating and I was really interested to take a look into this collection of rejects to see what sorts of esoteric or ill-thought-out heroes didn't make the cut.

Spanning from the golden age to the bronze age, Morris has amassed a collection of-- yes-- regrettable superheroes that, for whatever reason, weren't successful. I think in the case of heroes like Bee Man or The Ferret, it's pretty obvious why they didn't work out. But some of them, like Moon Girl, actually sounded awesome. Moon Girl is basically Sailor Moon-- she's a princess with magic moon jewelry-- but she came out decades earlier. I think we all desperately need/want a Moon Girl revamp, thanks. Also, can we talk about Pow-Girl, the wife who was so worried about her superhero husband's safety that she created her own secret identity to look after him? That's the stuff of forever love, right there.

Some of the other superheroes I found hilarious: a detective hero named 711 who came out decades before the drugstore but you can't help but imagine delivering Big Gulps and chimichangas to stoned and hangry frat boys; Kangaroo Man, who doesn't dress like a kangaroo or look like a kangaroo, he just pals around and feeds treats to a crime-fighting kangaroo, which is actually a little sad; the unfortunately named Red Torpedo and his love interest Queen Klitra (think carefully about this; no explanation should be needed); a Superman copycat named Stardust who has so many abs that even his back has abs; Gunmaster, basically an unlicensed apologist for the NRA; and Morlock, a genetically modified eggplant LOL. And then there's The Red Bee, Bee Man, Dollman, and Doctor Hormone.

I read the sidekick book before this one because people were saying it's the weakest, and they're right. When you're writing about bad sidekicks in successfully established franchises, you're self-selecting because those superhero comics had evolved to the point where they could include sidekicks. Some of them were silly, yes, but there's something about these superheroes who had their books all to themselves and still didn't make it that's way more amusing. It's like watching a failed TV pilot vs a failure of an episode in a popular TV series. One is way more interesting and endearing.

This book, I can definitely say, was everything I was hoping it would be.