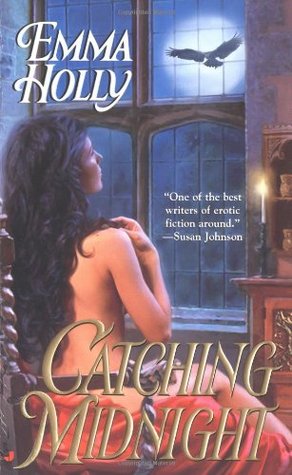 CATCHING MIDNIGHT showed up on a list of retro paranormal romance novels and since that's something I'm really interested in, I decided to buy this book. I loved the cover, too. It shows the wild, ethereal nature of the heroine, Gillian, who is so at ease in her own skin, and it also kind of shows the longing she has for the freedom and the wilds, as well as the bond she has with her falcon familiar. It's both cheesy and haunting, which is a great way of describing the book.

If you've read Susan Squires's THE COMPANION series, this is very similar to that in terms of tone. When we meet the heroine, she's mortal and fleeing from her house as her mother and brother have come down with the black plague. At the crossroads, she encounters two immortals named Nim Wei and Auriculus, who are shape-shifting vampire creatures called upyr. Upyr are kind of like a cross between werewolves and vampires and they take animal familiars. Nim Wei represents the dark side and Auriculus the light, although neither are pure good or evil.

Gillian chooses the lighter side and lives for several years with a wolf pack of shape-shifting upyr but she isn't happy and wants to stake out her own path. She ends up fleeing from her wolf family and takes on a baby falcon as her familiar, only to be captured by the brother of the lord of Bridesmere. He thinks she's an ordinary bird and begins training her to falconry, and Gillian finds herself fascinated by Aimery-- by both his strength and his compassion.

I liked this book a lot but there were some things I didn't like. It's pretty smutty for a romance of this time period, which was fun, but a lot of the scenes were way too cheesy. For example, the phrase "engine of love" is used in reference to a certain piece of anatomy, which, no. Gillian also spends way too much time introspecting. The best parts of this book were actually the most serious: meditations on human nature and what constitutes good vs. evil. Nim Wei's character arc-- she wasn't the villain I thought she'd be, which made me like her more. I also liked the complex relationship between Aimery and his brother, Edmund, and their shared history participating in the Crusades.

I don't think I've ever read a medieval vampire romance before and I really liked the author's unusual take on it. This is kind of what I was hoping Christine Feehan's Dark series would be like, and it wasn't, so it was really fun to get what I was looking for in this book. Even though it felt a little too long, I enjoyed the characters and the story and I'll probably end up reading more of the books later on.