Redefining Realness: My Path to Womanhood, Identity, Love & So Much More by Janet Mock 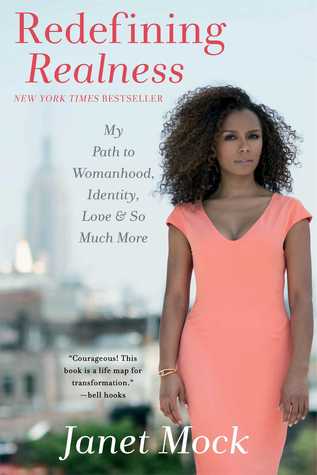 I've had this book on my Kindle for ages but never got around to reading it until now and I am kicking myself for that because this book was so good. I tore through the pages feeling an incredible emotional investment because the way Janet Mock writes really sucks you in. REDEFINING REALNESS is Janet Mock's memoir about womanhood, and, more specifically, womanhood as told through her own unique perspective as a BIPOC/Native Hawaiian transwoman.

There were so many passages in here that I wanted to quote. Her writing is gorgeous and she brings up a lot of really good points. She writes about what it was like for her to be raised as if she were a boy and her gender dysphoria and body dysmorphia. She writes about sexual assault (TW!) and the ways it psychologically damaged her for years to come. She writes about sex work, and the male gaze, and how the whole framing of "passing" is harmful because it holds up cis-gendered people as this lofty ideal, while also enforcing toxic beauty standards. She also writes about coming out, self-love, and what it was like for her to get her various therapies and surgeries.

At times, this was a very difficult read because she goes to some very dark places. But juxtaposed against every painful section is a friend or group of friends who supported her or a passage of self-affirmation about how she likes who she is. I also thought it was interesting about how she wrote on privilege, and underscored how no woman (trans- or otherwise)'s experience is going to be the same. Many things for her were difficult, but as someone who is conventionally attractive and had a family who mostly (with mixed success) supported her transition, she automatically has certain advantages that made her situation easier than someone who is not as conventionally attractive, doesn't fit the Western gender norms for what is considered feminine, and doesn't have familial support.

I would recommend this to anyone who is looking for a solid memoir that deals with important subjects pertaining to feminism, trans issues, coming of age, and womanhood in a fresh and engaging way. Less topically but perhaps most endearingly, I kind of fell in love with all of the early 2000s cultural references. Destiny's Child, perfumed lotion, Lipsmackers, TRL. My childhood.