The Leopard King by Ann Aguirre 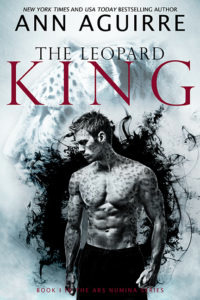 I think some people think that reviewers are just sitting and cackling while writing negative reviews but for me, it's honestly a pretty demoralizing experience because it means that something I really wanted to like didn't pan out, and that's never a good feeling.

THE LEOPARD KING starts off decently. I'm going to preface this review by saying that shape-shifter paranormals aren't my favorite, although there are some that I really like, but I'm not really an expert in the genre or the tropes. So, Dom, the pack leader, has isolated and gone off on a self-destructive bender after his wife's death. Pru, the friend of the wife, has been voluntold to retrieve him. When she finds him, he's a mess, and eventually she wrenches a cruel bargain from him that he'll return when she can shape-shift because she's what is called a "latent" meaning she has never gotten the ability to turn.

But, obviously, she soon does get the ability. And Dom comes back--

So here's the thing. I'm never really a fan of the "dead ex" trope, especially when the ex was the love of the hero or heroine's life and they kind of feel like the consolation prize in the relationship. I've been in that position myself, where you are constantly being held up against this phantom of a person you'll never match up to, and it's a really bad feeling. Because of this, and because of the way the characters were written, they never really felt like they had chemistry, which made all the sex that happened between them feel stilted and awkward. I liked that there was consent, but in a weird way, there was so much talking and consent that it felt more like a playbook for a relationship than an actual relationship. Like, if you told a relationship therapist to sit down and write an instructional guide on how to have a healthy relationship, but make all the examples shape-shifters, it would come off a lot like this did.

The world-building was interesting but there was so much focus on bland sex that a lot of the more interesting facets of the world, like the various shifter clans and court intrigue and plotting, really slipped through the cracks and/or didn't get adequate page time. I've already bought the whole series and heard the other books get better so I ended up really skimming through this book to get to the end just so I would have a little bit of the backstory that I needed to continue. Otherwise, I would have DNF'd. I love this author and especially her Sirantha Jax series, so this book was a huge disappointment.