The Devil to Pay by Liz Carlyle 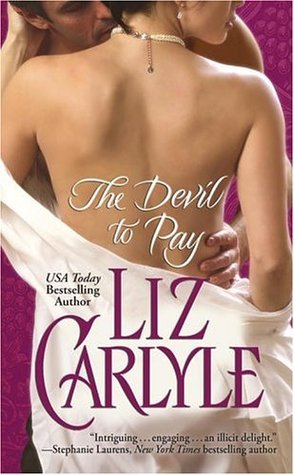 INFINITE STARS. This is now one of my new favorite romances and I shall heretofore be embarking upon my own personal goal to force it upon everyone in my acquaintance. You see, one of my personal favorite tropes is that of a reformed rake, and if that reformed rake is paired against a no-nonsense woman with a backbone of titanium who sees right through all of his shenanigans and refuses to give him an inch of slack, SO MUCH THE BETTER. And if said woman also happens to be a lady thief who encounters the hero by tying him up and hoisting him by his own petard in every sense of the word... EVEN BETTER...ER.

That is how Aleric Devellyn meets the heroine, you see. Sidonie is a teacher of decorum by day and a lady thief called the Black Angel by night, where she punishes bad men who do wrongdoings to vulnerable women. In case that wasn't nifty enough, she also donates heaping amounts of her ill-gotten gains to women's charities. The rakish marquess is just the latest in her checklist, only-- he isn't quite as bad as all that. Dissolute? Yes. Tortured? Yes. Furiously angry about being tied up and left for humiliation in a tavern? Totally. But bad? Not really.

The story gets even more interesting when the marquess takes up residence across the street from Sidonie and they meet after he nearly runs her over. Sparks fly and he basically inserts himself into her alter ego's acquaintance, which makes her verrrrry nervous because when she saw him last, he was calling her all sorts of names and promising the darkest sorts of revenge. You just know that eventually the two worlds are going to collide and that it's going to be totally explosive when they do.

I just loved this book so much. The banter was witty and intelligent and delightful. The cast of side characters was bountiful but didn't take too much page time from the main couple. I loved Devellyn's friend, Alasdair, and Sidonie's friend, Julia. Both of them had such wholesome friendships and it was great. Devellyn's mother was HILARIOUS and Sidonie's brother, George, was intense and scary-cute. I hope he's the hero in one of the other books in this series because he kind of reminded me of Derek Craven from Lisa Kleypas's Gamblers series, only rougher around the edges. What else did I like? The sex scenes were great (although there's one scene that is definitely forced consent/dubious consent). The backstories of both Devellyn and Sidonie were so angsty and INTENSE. The groveling and the pining was A+++. AND CAN WE TALK ABOUT THAT GIFT AT THE END? MY HEART.

There is just so much I loved about this book and absolutely nothing I hated. Cut to me immediately buying everything up by Liz Carlyle, an author I have never read before but now fully intend to stalk.