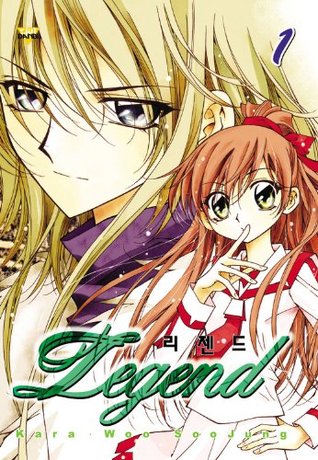 I used to be really into manga/manhwa when I was younger. There's a couple that still have my heart-- Black Bird, Hana Yori Dango, Red River, Bride of the Water God, and so on-- but it's not really something I seek out quite as much anymore. This was a title I bought when I was younger and never got around to reading, and since I'm trying to clean out my shelves a bit, I thought it would be nice to give it a go and see if I wanted to keep it or get rid of it.

LEGEND kind of reads like an INUYASHA clone (there used to be a lot of those). The heroine is a hapless schoolgirl who ends up crossing paths with an otherworldly warrior after he pushes her out of the way of a moving train, Twilight-style. Faster than you can say, "Do I dazzle you?" he whisks her off to a museum where he performs some sort of magic doohickey ritual that ends up transporting the two of them into what I think might be Joseon era Korea judging from the abundance of elaborate hanboks. And of course, this being what it is, they immediately run into whatever the Korean equivalent of Wickerman is, where people are sacrificed to a giant lake. YAY.

And that's... literally the end of book one.

So, like, I honestly don't know what to make of this book, or what I was thinking when I bought it. There's a potentially promising evil dude in the beginning of the book, but we never see him again. Warrior dude is an even bigger angstwhore than Cloud Strife, but the heroine (I forgot her name already, let's just call her Plucky) is the real star of the annoying bandwagon. First of all, her mom is a homicidal maniac and it's supposed to be funny. Plucky seems to get all of her murderous impulses from her mom because she's constantly getting into fights, and she literally reacts to situations the way a robot would. There's no real emotional connection or reactions. It's all just played out for lolz. The heroine even breaks the fourth wall at some point and says something about the hero like, "I should ask for his number since this is a girl's manhwa." Like, girl. #PRIORITIES

Also, and this is just a personal beef, it's mentioned casually how ugly the heroine is several times. She's also called short and stubby. But then at one point, we're told that she looks like Ji-Hyun Jun, who is a Korean actress/model. Can we just let the "haha let's call this totally attractive and cute looking girl ugly because god forbid we have a plain or actually ugly heroine" trend die? If you call someone like Gianna Jun ugly (which is not nice), what's that supposed to make ME? Grotesque? It's just so bad for self-esteem, you know? And this is a manga geared at young girls. STOPPIT.

I don't think I will be keeping this book. Giving it one and a half stars because the art was ok and the Wickerman storyline was actually really interesting, but minus everything else for acting like robot people, perpetuating toxic beauty standards, and being a complete WTFest of the first order.