Tamagotchi Diary: Requiem for a Digital Egg by Joe Hutsko 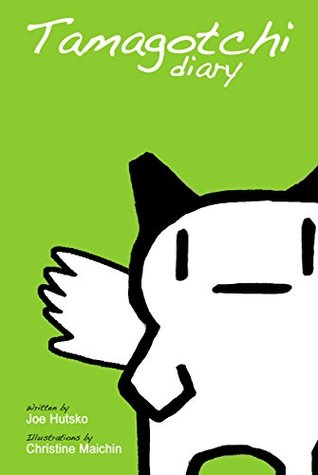 I'm currently reading this book about Japan's contributions to pop-culture and one of the phenomenons it mentioned was the Tamagotchi. I took a break in my reading to search Goodreads and see if there were any books about Tamagotchis and this book immediately popped up. TAMAGOTCHI DIARY is a collection of reprinted essays that were originally published in The New York Times in the late 90s, at the height of the virtual pet fad. Curious, the author went out and purchased two Tamas (one for him and one for his friend) and for two weeks, kept and published a diary of his Tamagotchi parenting.

Writings like these can easily come across as patronizing, but this was honestly one of the most wholesome things I've read in a while. I found it hilarious how quickly the author went from hesitant to "don't touch him, he's sleeping" to his friends. It brought back all these memories of playing with my own Gen. 1 Tamagotchi as a kid, trying and failing, many, many times, to raise my pet to adulthood.

In addition to his pet, the author also writes about a Giga Pet he received (Digital Doggie) and some Aqua Babies he bought on impulse (which seem to be kind of like Sea Monkeys). As he enthusiastically rears these simple pets, he talks about his work in San Francisco, the letters he receives in response to his articles from other Tamagotchi enthusiasts, and his grief about his deceased older brother, Tommy, who he decides to name his Tamagotchi after.

Recently, I obtained a whole bunch of watch batteries and I decided to use them to bring my own Tamagotchis back to life. I don't have my original ones anymore, but I have a whole bunch of Giga Pets, and some of the later incarnations of Tamagotchi: Tamagotchi Connection and Tamagotchi Music Star. They used to have a website that went with them, called Tama Town, where you could enter a code and "play" as your Tama Character, and then when you left you would receive another code that would transfer any items and currency you obtained while playing. It was like Club Penguin meets Neopets and it was one of the ways I did self-care in college. Playing these newer iterations as an adult, I was surprised at how fun and strangely sophisticated they were. The original was very cut and dry-- newer ones had multiple games, shops where you could buy toys and accessories to have your pet do these special cut scenes, and career paths that you could put them on, and have them succeed at.

I really enjoyed reading TAMAGOTCHI DIARY. It's a window into a simpler time and simpler technology, and feels very cozy and self-contained-- kind of like a Tamagotchi.