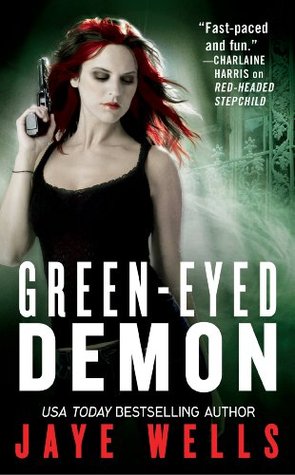 I bought the whole series a while ago when it went on sale and decided to binge-read the lot of them since fall is my favorite time of the year to read paranormal romances. I don't know why, I just find it more fun to read about witches, vampires, and werewolves when everyone is starting to get into the Halloween spirit, and as any dark soul knows, Halloween officially starts on August 31st and doesn't end until November 1st.

The Sabina Kane series is an older paranormal series. I think it came out in the late-2000s. Some of the pop culture references are already dated, but this is one of its more endearing traits, to be honest. I always like it when a book is kind of a snapshot of the time when it's written. Less engaging for me is the fact that it is simultaneously doing too much and too little. Sabina feels pretty interchangeable with a lot of the other kick-butt, leather-clad heroines of this time period, and her whole personality basically revolves around being a trigger-happy, quick-tempered snark.

The world is also a LOT to take in. And every book introduces even more. Only three books in and I'm already up to my neck in faeries, werewolves, demons, mages, and, now, voodoo practictioners. Sabina is a mixed-blood, half-witch and half-vampire, which puts her at the center of a power grab that basically all of the groups seem to be conspiring towards. But the problem for me is that there's just so MUCH with so little character development that I find it really, really hard to care.

Also, there's a short story that comes between books #2 and #3 that is basically required reading, or else you end up with a big gap in the timeline regarding what happens to one of the characters. It's not a big deal to skip but I didn't understand why it wasn't just added to book 2 or 3, especially since so much of this book already feels like thriller. At least the first two books had enough action to keep me engaged, but all the globe-trotting is getting old. They've already been to San Francisco, L.A., New York, and now New Orleans. And a lot of the in-between stuff is just banter and arguing.

I really tried to give this series a shot but I'm just not feeling it. I think I'll be calling it quits here.