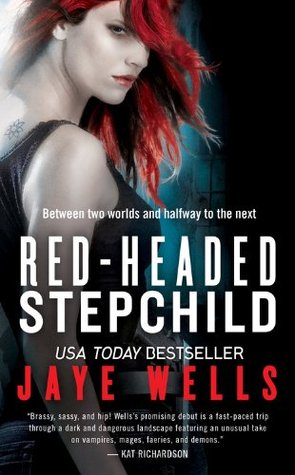 I write this review at nearly 2 in the morning on a work night. Even though I told myself the book was only okay, I needed to find out what happened. Which just goes to show that even if a book isn't written in the best way, a good story can be the saving grace for mediocre writing. I'm not trying to be mean, either. I mean that sincerely from the bottom of my heart. The Sookie Stackhouse series and the Stephanie Plum series won't be winning Pulitzers, but I read more of those books than I'm proud to admit, even though they were basically the same story regurgitated over and over, because they were fun. The Beatles were wrong-- all you need is fun. At least if you're picking up a book.

Here's the thing-- I almost didn't make it through RED-HEADED STEPCHILD. It's so cheesy and utterly drenched in its 2000s-ness. I mean, the heroine, Sabina, is a red- and-black-haired, leather-wearing Hot Topic Warrior who's half-vampire, half-mage. She's like a walking, talking self-insertion fic from someone who read too much L.J. Smith as a kid and never got over their Night World obsession (by far, the superior of L.J. Smith's many series; don't @ me).

Let me tell you just a few of the stand-outs of this book.

🦇 Vampires all have red hair. Darker red hair = older vampire. They can't dye it or anything, either. It's just red forever. Them's the rules. Does this make sense? No. Did I buy into it? No. Did I roll with it? *starts playing some Coolio*

🦇 Sabina is sent by her cold and proper vampire grandma to infiltrate a cult run by a half-demon, half-vampire guy named Clovis who gets his initiates in the mood by putting heroin in the incense burners. He's supposed to be a scary dude, but Clovis makes me picture some overalls-wearing dude with a meth lab in his trailer. I spent a lot of time giggling over his name, I'm sorry. But where did that name come from?

🦇 She's also being stalked by a mage named Adam who says hello by summoning a demon to curse her with. The demon is named Gighul and he is absolutely the best. He sits at home all day watching soap operas and drunk shopping. Gighul is me. Also, he turns into a cat. YES.

🦇 Now that I think about it, Sabina is a lot like Sabrina. She's a half-breed at the center of a big war where everyone wants to use everyone else, including her. She has a demon cat familiar. She's witchy.

🦇 There are vampire wineries where they mix blood with wine. Vampire. WINERIES. And you thought vampire baseball was bougie. Step aside, TWILIGHT, and try some Sanguinarian Shiraz.

🦇 World-building is a little confusing. There's demons, faeries, vampires, mages (which are also called "mancies"), and humans (obviously). They don't like each other very much but there's a truce that's veeeeeery tenuous. Seelie court is mentioned. Mages/mancies get their powers from Hekate. Vampires are descendants of Lilith and Cain. I think humans are called Adamites, which makes it even more confusing that the mage/mancie character is named Adam.

Is this starting to feel like fanfiction to you yet? Yes. Will you roll with it? *starts playing more Coolio*

The writing feels a little chattier than I like but the story was fun and Sabina wasn't a bad narrator. She sort of reminds me of older Anita Blake novels, in that she's clearly a fantastical self-insertion character, but there's still a little soul there, too. I own the whole series and will probably end up bingeing the rest of the books really soon-- and you know what? I'm actually really looking forward to it.