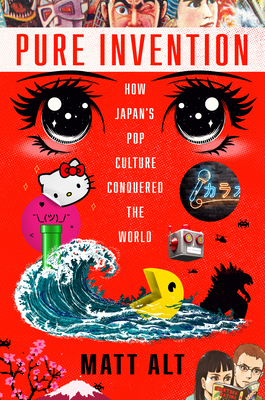 Japan has contributed significantly to Western nerd culture, and while many nerds and otaku to this day continue to see the country as a sort of full scale Anime Amusement Park that just happens to be a nation, we (by which I mean, most westerners-- specifically white westerners) don't really take into account the broader historical contexts that framed such innovations, or what they meant for the country that invented them in the first place. And sometimes that can lead to a lack of sufficient appreciation or offensiveness.

PURE INVENTION takes a number of Japanese inventions that ended up migrating over to the U.S., and in this collection of essays, Alt provides that framework. It starts with WWII, when artisans repurposed their shops and factories to contribute to the war effort, and how exporting toys and the like revitalized their sunken economy, and ends with the 2000s and the early days of the internet, when a site of message boards for lonely guys on the internet called 2chan ended up providing the source code for a popular site everyone knows the name of now: 8chan.

The essays are varying degrees of good, although I'll admit I skimmed most of the Walkman chapter because I found it way too technical and boring. I loved the essay on Hello Kitty and the burgeoning kawaii culture among girls with shoujo manga (shout-out to Poe Clan) and pretty stationery and trendy schoolgirls, although the chapter on schoolgirls themselves ended up feeling redundant as a result because it was basically just a remix of the Hello Kitty chapter. I thought it was really interesting to blend Pokemon and kaiju into a single chapter that basically ended up being about the marketability of monsters, and the section about Tamagotchis gave me serious nostalgia vibes (and helped me find this amazing essay, the TAMAGOTCHI DIARY).

There are two anime chapters, old and new. The old chapter talks about Astro/Atom Boy and some of the early dubbings that were renamed in the U.S. (like Speed Racers). It also talks about the pulp anime movement (gekiga) and how that tied into Japanese counterculture/protest culture at the time. The more recent anime chapter is about things like AKIRA, Hayao Miyazaki, and Gundam (of course), which provides a neat segue for the otaku chapter, and how it went from being an incredibly unfavorable term to something that was pretty much heartily embraced and reclaimed by nerds and geeks alike.

The strongest chapter by far is the 2chan/8chan chapter and I think you could honestly make a whole book about that on its own. This chapter is also probably going to be the hardest to read for a lot of people because it highlights some of the big controversies that came from that site, you know the ones. I don't want to say too much about this chapter because I found it so upsetting, but it was also really fascinating and this was the chapter I ended up speeding through the fastest.

Overall, I really, really enjoyed this book. The cover was super cheesy and I'm always a little worried when someone who isn't part of a culture writes a book about a culture, but this author had fantastic credentials (and he's a localizer, which are the people who translate and also adjust references to Japanese products that are being marketed to the U.S.; side note: for many years, I thought doughnuts in Japan were triangular because Pokemon localizers didn't seem to think that kids would be able to understand what onigiri were, so in the original American TV show, they were called "doughnuts"). It's clear Matt Alt has a real passion for Japan and also for geek culture and that is reflected in the writing and his thoroughness in interviewing key planners and providing a substantive bibliography.

On a more personal note, one of my big dreams as a teen nerd was to go to Japan (although I'll admit, I was guilty of thinking it was going to be Anime Amusement Park in my youth). In my twenties, I was finally able to go and I'm glad I went as an adult and not a kid because I'm not sure I could have contained my enthusiasm and approached Japan with the respect it-- and all countries you, as a foreigner travel to-- deserves. It has a very old history, filled with both good and bad things, and even though Alt has mostly showcased the good, some of the items in this book are tarnished by tragedy. Rarely do you see a pop-culture book written with this sort of gravitas, and even though I was expecting a fun, personal romp through some of the author's favorite hobbies, like my sober trip to the country taken in my twenties, my reading of this book ended up feeling so much richer because of that solemnity.