Enticing the Prince by Patricia Grasso 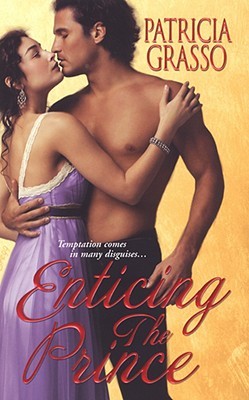 So every once in a blue moon I remember that I have a Kindle Unlimited subscription and I'm like, "Oh shit, I better use it or lose it," and I hightail it to my nifty and extensive Goodreads list, where I proceed to glut myself on books until I forget about my KU sub again. Luckily there's no shortage of books to be had so the cycle basically perpetuates itself.

ENTICING THE PRINCE intrigued me because it's a royal romance and surprisingly you don't really see that many royal romances-- maybe because viscounts and dukes are easier to imagine and less intimidating? Anyway, I was all for it-- and for that sexy Zebra cover-- so I dove right in. GIVE ME ALL THAT HOT RUSSIAN PRINCE ACTION, OKAY? I haven't had my fix since Susan Johnson's SEIZED BY LOVE.

Katerina is a Russian jeweler posing as a contessa. When the book opens, she's pointing a gun at someone and demanding satisfaction. Then the book zooms back into the past, where we see her planning her revenge on a Russian prince named Drako whose name her sister called in her final moments. Katerina blames Drako for the death of her brother and sister and is determined to find out what the extent of his culpability is and, if so, how best to punish him.

The beginning of the book was really good and filled with all of the things I love in romance-- witty, sparkling banter; alpha heroes; conniving heroine; interesting secondary characters, etc. But things started to fall apart around a third of the way in. There were just too many characters to keep track of and I started getting really confused about who was who. Also, the sex scenes were... um, not the best. Actually, I thought they were very unsexy, especially when Drako decides to impregnate the heroine to trap her into marriage, which is not my fave. Also, THERE WERE WAAAAAY TOO MANY CHARACTERS. Which made this book waaaaay too long.

I ended up skimming to the end because I wanted to see what happened and I was hoping there would be a good twist or something to make the reading worthwhile but no. The villain was totes obvious and the ending ended up being anticlimactic so I was kind of disappointed all around.