Cast in Shadow by Michelle Sagara 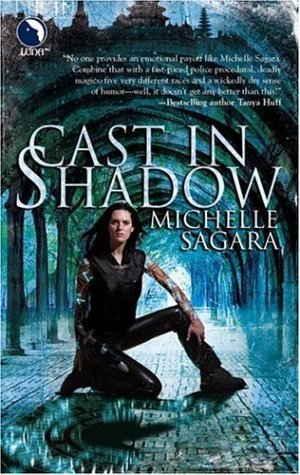 I have the terrible habit of leaving half-finished books around (either literally on the floor or figuratively on my Kindle) and since I'm gearing up for not one, not two, but THREE buddy-reads(!), I figured I probably ought to get my ass in gear and finish some of these bad boys before I get started. And lest you think I'm some sort of book wizard (which, in fact, I am), no, I didn't just read seven books in a day. I read seven half-finished books in a day. Which rounds out to maybe 3.5 books, which I still feel like is pretty impressive.

CAST IN SHADOW is actually a reread for me. I read it the first time when I was young (when the Great Wall of China was only half-built and people still talked to each other on the telephone). I remembered giving it a two, which I thought might have been a little harsh. Young Me was a lot harder to please than Old Me in some ways. Chiefly because Young Me labored under the belief that you were only as smart as the books you liked to read. Whoops. Bad Young Me! Bad!

Anyway, I started this book again for funsies and at first I was like HMMM THIS IS REALLY INTERESTING. It's one of those fantasy novels that feels vaguely medieval but the language is super modern so you're like Robin Williams in Jumanji when he's like, "WHAT YEAR IS IT." But I dug the leather pants and the court intrigue and the fact that there are not one, not two, not three, not four, but FIVE hot guys to ogle, plus magic tattoos, dragons, and a murder plot. What's not to like??

Well, this book is 500 pages. Officially I nope-quit at p.279 but I skim-read to the end because I wanted to see what would happen. Not much. It's also super confusing because there are all these names for everything with a lot of overlap (like, you can be a Leontine breed who speaks Barrani and is still a Hawklord-- decipher THAT, you peasant), and none of it ever felt really all that well-defined. The heroine is also an unquestionable Mary Sue of the "I wear leather pants and will beat you to death with grumpy sarcasm" variety that was so popular in the oughts. She also bears a pretty stark resemblance to Celery Saltine-thin from the Throne of Glass series, so actually if you like those books, you might like this as it has the same "peasant dragged up through hell and back, gone through some shit, now serving a hot prince while the kingdom potentially falls to magical ruin" vibes. #noshade

I guess I just got tired of waiting for things to click. You win this one, Young Me.