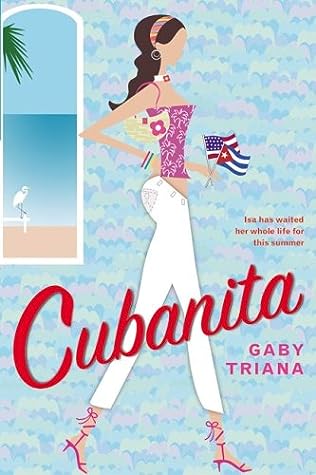 CUBANITA is a cute, sassy coming-of-age story about a girl named Isa. Isa is the sort of YA heroine I love-- she's not perfect, she's not particularly good or bad. She does good and bad things, and makes tons of mistakes, and reads like, well, your average teen girl. What makes this book extra interesting is that it is a) sex positive, b) about a Cuban-American girl who is struggling to come to terms with her dual identity, and c) actually affords Isa tons of agency, not just in her sexuality but also in standing up for herself.

This came out like fifteen years ago and it seems to have slipped through the cracks, which is really sad because diverse books really weren't marketed as well in the aughts as they are now, which made a lot of people think that they just basically didn't exist. The on-page Spanish, her fun interactions with her family, and the brushes with Little Havana really give this book a fun, unique vibe, and all of the subject matter-- first love, first betrayal, forming your social identity-- are just as relevant now as they were then.

I'm giving this a three because I do think the tone was a little all over the place. It starts out reading like classic (albeit slightly immature) chick-lit, and then towards the end of the book it gets surprisingly serious. I actually liked the second half a lot more than the first, especially when Isa gets some truly epic revenge on someone who wronged her. This really isn't a romance, even though there is romance in it. The focus is really more on a coming-of-age. I think I might have liked it more if the story flowed better and the beginning was a little less rocky.

Overall, though, I thought this was a very fun read and I'd recommend it to anyone who likes edgy chick-lit that dives into real-world issues with heroines who have tons of confidence.