Reaper of Souls by Rena Barron 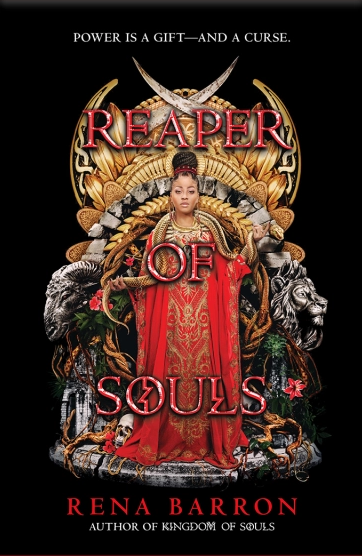 That moment when the title of book comes into play. 😏

I quite enjoyed KINGDOM OF SOULS and was excited to read the sequel, REAPER OF SOULS. KoS was surprisingly brutal for a YA book and the negative reviews complaining about this were actually what ended up selling me on it. In a market that has become increasingly derivative and safe, I'm always down to check out authors who feel like being more experimental and daring. There's a long list of triggers for the book (which I tried to mention in my review), but if you can stomach such content, it's a pretty solid debut-- especially for fantasy.

RoS, on the other hand, was kind of a disappointment. Like the previous book, it took forever to get moving, but unlike the previous book it lacked the immediacy and it didn't really need to lay out all that world-building a second time. KoS had two really imposing villains and some super intense scenes to back up their evil-doery. On the other hand, RoS has already established those stakes, so I was kind of hoping for more action and less world-building. Arrah was a flawed but compelling protagonist and I feel like in this sequel, she ended up falling kind of flat. Rudjek, on the other hand, became much more interesting but he couldn't carry the narrative slog alone.

As with the previous book, RoS doesn't truly get good until the last half-- especially the last 15%. But I don't think it's worth plowing through. An editor really should have shaved a lot of the repetitive scenes from this book. It was shorter than the previous book (which I think was 500 pages?) but still way too long for what it accomplished. I'm not sure I'll be reading the next book in the series.