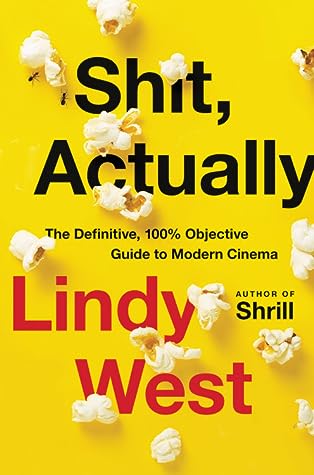 As a millennial 30-something who has seen movies, I was totally curious to see what this other millennial 30-something who has also seen movies would say about movies. Here's the thing: I don't actually watch that many movies. Some people are film buffs, and some people are like, "Yeah, I've never seen the Godfather," and I am the latter category (and yes, truefax, I have never seen the Godfather). But I love Lindy West and I love reading about people talking about movies, so I thought this collection would be superfun. And it was.

This collection of pop-cultural essays focuses primarily around movies that came out in the nineties. The essay about Love, Actually did me in, because THANK YOU, I also found that movie unwatchable. I also felt personally vindicated by the fact that she didn't like American Pie (ditto), and the overratedness of Reality Bites (I tried watching it in high school and never looked back). I think the crown jewel in this collection is her review for The Fugitive, which I have also never seen but now I kind of want to, followed closely by Face/Off (Nicolas Cage is in it, which I think is all you need to know).

Lindy West seems to favor action movies, as it is pretty heavy on titles like Speed Run and Rush Hour, and I do not like action movies, so the fact that I found these essays as engaging as I did is truly testament to the author's writing ability. Love, Actually and American Pie resonated with me on a truly personal level, and her essays on Twilight, Harry Potter, and The Lion King made me laugh, even though she was totes attacking my faves, because I know how to laugh at the things I love (which is maybe why the things I love sometimes get mad at me-- lol, HI FAM). I kind of wish that this collection was longer and included her thoughts on things like Glitter (an underatted classic, imo), Show Girls (ditto), and some of the other Disney Renaissance movies (Little Mermaid! Pocahontas! Mulan!). I seriously hope she has a follow-up planned, as I didn't even realize how NECESSARY her commentary was for my life until I started reading and couldn't stop giggling.

This collection isn't going to appeal to everyone-- it's leftist and feminist, which, you know, I appreciate, but I know some people are going to be like, "SJW [blankety blankety] polemical [blankety blankety] CAN'T USE MY FAVORITE WORDS ANYMORE [blankety blankety] POLITICS. Which, I mean, you do you. But also, this is the 21st century and if you allow things to stagnate and be the same as they were for the last twenty years, you're going to be mired in all of the problems you've been busily sweeping under the rug this whole time, and oh no, they've turned into mud. WE ARE LITERALLY STUCK IN THE PAST. SEND HELP. Nobody wants that. Except the right.

Anyway, I loved this collection. I bought it on impulse hoping that it would be good and it was actually great, so now I guess I need to hunt down all of the other books this author has ever read and read them.