Gentle from the Night by Meagan McKinney 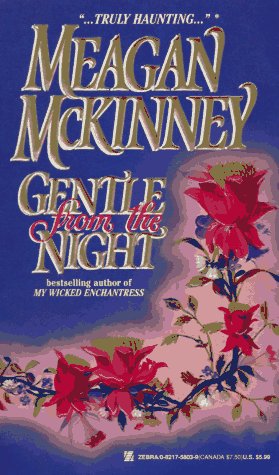 I don't think it's any secret to anyone who follows me that Meagan McKinney is one of my favorite historical romance writers. Like Anne Stuart, she doesn't always quite get it right, but when she does, she really does-- and also like Anne Stuart, she has a type: gamma AF. Of my two favorites of hers, there is Ivan Tramore from WHEN ANGELS FALL, who is pure, dark, animal passion; and Trevor Sheridan from LIONS AND LACE, who is icy control leashed in vengeance and restraint.

GENTLE FROM THE NIGHT is a totally different beast: a dark Gothic filled with themes of revenge, obsession, and despair. Alexandra Benjamin is the daughter of a Jewish doctor who has just been spurned by her lover. Penniless and desperate, she engages to employ herself to Damien Newell, lord of Cairncross Castle, who needs someone to help his developmentally disabled brother learn how to speak again after a traumatic, but unspecified incident.

Damien is displeased when he finds out that Alex, as she introduced herself in the letter, is actually female, but her determination and intelligence end up persuading him to keep her on as a sort of governess despite his reservations. Damien is a cold and cruel man, and a little bit mad. It's obvious from the first time we meet him that he is severely depressed and traumatized in some way by something that happened in his past, and as Alexandra learns more about the brothers, she realizes that the darkness lurking in the castle extends far deeper than the shadowy catacombs that run beneath, perhaps into the very hearts of all who dwell within.

In some ways, this reminded me of a slightly toned-down version of BLEDDING SORROW, which remains one of the darkest Gothic novels I've ever read to date. The hero's mental torture and anguish also reminded me a little bit of THE PORTRAIT, especially since both feature strong heroines who are surprisingly immune to their lovers' cruelty and darkness, sometimes to the point of putting their own personal safety at risk. This is especially true of GENTLE FROM THE NIGHT, where the hero is incredibly cruel to the heroine in the last act, even, at one point, forcing himself upon her. To put it bluntly, in a game of fuck, marry, kill, you'd fuck Ivan, marry Trevor, and probably kill Damien before he kills you first by dragging you by the hand into hell at gunpoint while swearing his eternal love.

I buddy-read this book with Heather and Nut Meg, and my thoughts are pretty close to theirs. McKinney is usually very fond of dark heroes so it was interesting to see her write such a dark romance with a blonde, glasses-wearing hero who looked like a schoolboy. I also think the book would have been better if the line between the potentially supernatural and the real were more clearly drawn. While reading, I had several theories about what was really going on and I'm not entirely sure I liked the one the author ended up going with. I also felt like the ending felt too neat and too happy considering what the hero put her through. I was expecting more of a grovel.

Overall, I ended up loving this one and I think it's a keeper I would love to revisit, but Ivan Tramore continues to be Bae #1 in my McKinney Romance Canon.