I Married A Lizardman by Regine Abel 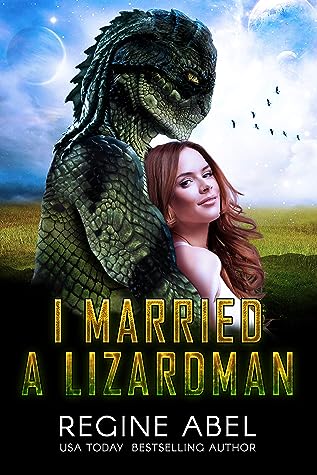 I saw this book on Instagram and was instantly intrigued because while the cover screamed "MONSTEROTICA!" the blurb seemed way more sophisticated. It was kind of giving me LAST HOUR OF GANN and RADIANCE vibes, two books I loved. The premise is also great, too. Think Harvest Moon: In Space. Susan is from a human colony on a planet called Meterion but only first and second daughters get married and land. Third daughters like her get to become indentured servants-- if they're lucky.

Because of this, Susan agrees to a marriage match between the Prime Mating Agency, which basically pairs biocompatible humans with aliens on other planets in economically beneficial arranged marriages.

Susan ends up going to a planet that begins with an X-- I can't remember what it's called. Xenia? Xerces? Something like that. Anyway, it's populated by aliens called Altdurians that are hunter-gatherers who live off the land. It's incredibly fertile land and people would like to use it for farming and part of Susan's goal in going there is to convince the aliens about its potential.

Susan's husband, Olix, is a total bae. He's the clan leader and an incredibly well respected hunter. He's also so respectful that he basically puts all human men to shame. Sign me up for the next flight out to Lizardmandia. After an awkward wedding ceremony and an awkward wedding night, they find that each other's company is incredibly agreeable. The only problem is the farming. Altdurians associate it with their colonizers, who forced them to dig in the dirt and poisoned the land with harsh chemicals. So farming as seen as base, distasteful, and harmful at best-- oh no.

I'm just going to go ahead and list out some of the things that I really liked/found humorous about this book.

👽 All the farming. It really was like Harvest Moon set in space. Plus, it was cool to see the heroine have a passion-- one that came into play so heavily in the plot no less. (Seriously, that ENDING.)

👽 The hilarious sex scenes. Were they supposed to be hilarious? Iunno. But with lizard men with retracto-dicks who splooge come that tastes like cotton candy, you can't expect me not to laugh. ALSO, he is so pleased at the "honor" of being her first that he wears her blood-stained bedsheets. OMG.

👽 Marriage of convenience. High key one of my favorite tropes and it's handled really well here. The compromise, attempts to understand each other's cultures, emphasis on communication and consent, and the fact that they TALK instead of having big misunderstandings was SO REFRESHING.

👽 Themes of environmentalism and sustainability. I mean, need I say more?

I am honestly blown away by how fun this was. It made me smile.